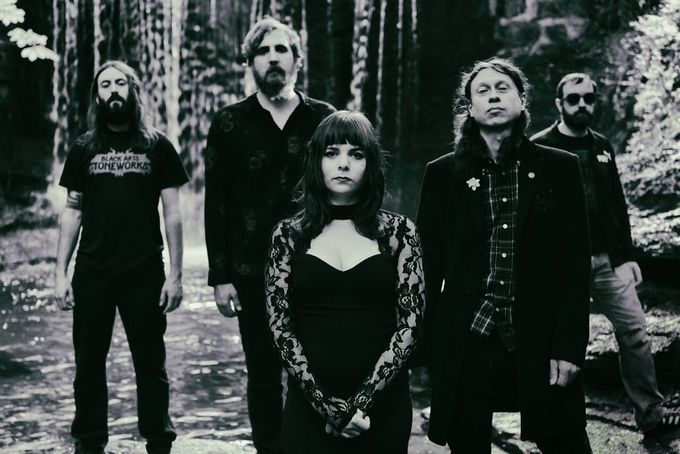 ‘Yn Ol I Annwn‘, Welsh for ‘Return To The Underworld‘, released in March is the third part of a trilogy of albums from Mammoth Weed Wizard Bastard that began with ‘Noeth Ac Anoeth’ in 2015 and 2017’s ‘Y Proffwyd Dwyll’ (which got them nominated for the Welsh Music Prize in 2017). Now the band have shared the expansive new video for ‘The Spaceships Of Ezekiel‘.

The label comment:
“We are stoked to bring you the latest video from MWWB, only the third official video that the band have ever done, and we hope you find it as intriguing and spectacular as we do. UFOs, druids and all sorts of cosmic weirdness are contained within this homage to 80s science fiction. The band are huge fans of film director John Carpenter’s work and this video … or short film if you will … is directly inspired by the maestro himself, and his 80s output in particular. Check that 80s vibe, and see if you can spot the direct references hidden in the piece. It is also truly a team effort, put together by director/cameramen Rob Hoey (from Limb), Joe Ralph (of Beatnik Wolf Productions), and produced edited by Ged Murphy (BAFTA nominated film editor of the three ‘David Bowie: Five Years’ films, amongst others). So fans of the power cosmic … come and take a strange cosmic journey with Mammoth Weed Wizard Bastard.“

Guitarist Paul Michael Davies adds “This is the video we always wanted to make. A retro Sci Fi thing that had the vibe of a movie. We tried to reference some of our favourite films visually but still have an original concept. It took quite a while to make but it was a real in-house affair, as in the whole thing was designed and produced by our label and friends of ours. The band workerd on the 3D models and concept, 2 friends Joe and Rob filmed the various sections and Ged from NHS (our label) put it all together in the edit suite over many a late night adding visual FX and getting across the story. Without him and the label it wouldnt have been made. It took a lot of work and was done on a micro budget but we think its a cool piece that captures the vibe of the album. Space Rock music, a Druid and a UFO encounter? Gotta be cool right? Hope the fans dig it. Best watched on a big screen in full“.

The eight songs that comprise ‘Yn Ol I Annwn‘ sees the band delve deeper into their collective influences, embracing full on space rock, atmospheric film soundtracks, melancholic acoustic interludes, psychedelia, cosmic moog’s and percussion, moments of introspection and light … and of course, large helpings of doom. The fat riffs, big hooks and endless space grooves are all present and correct.
And once again Jessica Ball‘s voice glides over it all, both sweet and melancholy, yet this time more assured. A myriad of stacked harmonies and layered vocals weave in and out of the tracks, adding an ‘other-worldly’ melodicism to the songs. No one else is pushing the boundaries of heavy like MWWB. Mammoth Weed Wizard Bastard sound like Mammoth Weed Wizard Bastard, full stop.

‘Yn Ol I Annwn‘ is out now and available on CD/DL and limited edition double vinyl. Full download included.

“They’ve already managed the near-impossible: finding their own sound. The weighty, distortion-drenched riffs hunker down and trudge like Windhand and Conan (or a certain other Wizard band), but the vocals—those wondrous vocals!—erupt from the mire like a beam of light” – Noisey

‘A deep, dark world that’s more than worth exploring‘ – Drowned in Sound