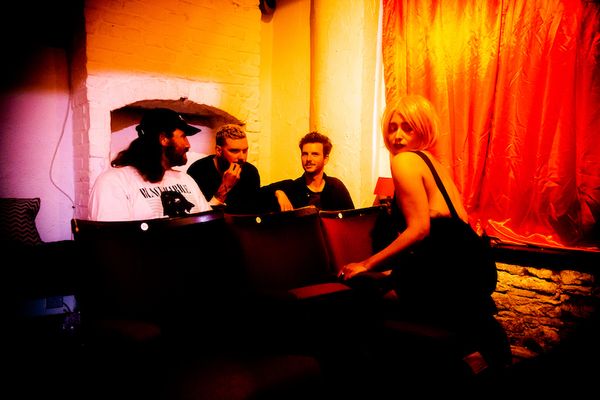 “Injury Detail” is a dramatic reintroduction, opening with a grand organ before morphing into a thumping dance track fit for a warehouse rave. Produced by Fair and Robin Stewart of Giant Swan, the song takes inspiration from dystopian video games and films such as Blade Runner 2049 and Bioshock.

“‘Injury Detail’ was inspired by the idea of being trapped in a liminal space, with the guitars creating a seemingly limitless and undefined landscape. The vocals act as a guide to possible salvation, or perhaps something of a more sinister intent,” explains Caulfield. The accompanying video was directed by Thomas Harrington Rawle.

Formed out of the fertile Manchester independent scene, Mandy, Indiana generate a sound that is at once chaotic and precision engineered – abrasive beats and gnarled guitars sit in thickets of distortion around Caulfield’s commanding vocals sung in her native language, French. Their songs, which incorporate found samples and field recordings, are recorded in a variety of spaces, from rehearsal rooms and home studios to cavernous industrial mills and shopping malls.

Mandy, Indiana’s first recordings emerged around 2019, culminating in their debut, 2021’s ‘…’ EP,  which featured a heavy-hitting remix from Daniel Avery.  Its single, “Bottle Episode,” was named a Best Song of 2021 by Pitchfork, who recognized the “perverse playfulness” of Caufield’s grim lyrics, and Paste, who hailed it “an exhilarating darkness for the bold to brave.”

The EP also led to Stereogum naming Mandy, Indiana a Best New Band of 2021 and NME to name them an Essential Emerging Artist for 2022. Since then, they’ve become a live favorite in the UK, supporting the likes of Squid, IDLES, Gilla Band, Wet Leg, and SCALPING, along with  festival appearances at Pitchfork Paris, End of the Road, and more.

The band will be making their US debut at SXSW 2023 as part of the official lineup. “Injury Detail” is a taste of more music to come from Mandy, Indiana this year.