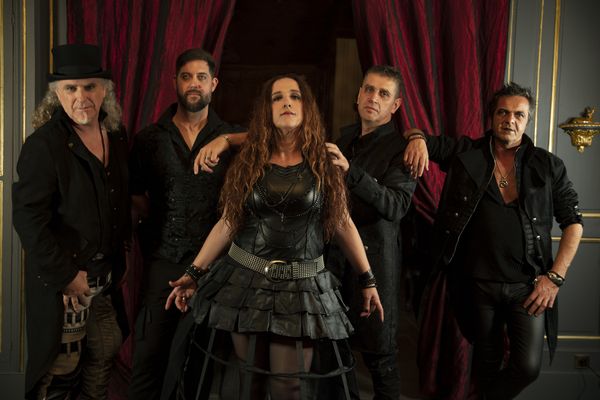 European tour with Rhapsody Of Fire

Today, the band presents their first English music video for the album’s title track, which can be viewed at https://youtu.be/lWoGUusvcvY​

The band adds about the track:

“In a baroque and burlesque atmosphere, I invite those who fight to stop fighting to get nothing, to come and build with me a better life and elsewhere, beyond life. A soul’s immortal.” – Carine Pinto (vocals/lyrics)

“A big riff with a simple structure to get to the essence of the singing melody. Carine’s vocals are particularly good with pop influences. A very nice solo from Lionel with twin guitars.” – François Merle (guitar)

What started out as a cover band to doing full fledge originals and being garnered “Best French Group of 2003” by Hard Rock Magazine and triumphing on the stage at Hellfest (Live video), “The Shadows Ball” is the band’s eighth studio album and first to be sung in English by new vocalist Carine Pinto who replaced Didier Delsaux in 2018.

The band made the decision to to do English songs as they wanted to make their music more accessible to foreign audiences in preparation for their 2023 European tour with Rhapsody of Fire in March.

“This album contains different songs from the Manigance standards. We have shortened the songs and worked on the arrangements. We think we can play a lot of these songs in our shows. It’s a sign that the fans should enjoy these songs. They are adapted to be played live. We have evolved in our writing process. The songs are still very rich, but the structure is simpler. We also listen to the latest productions to offer a modern album with a current sound.” adds guitarist François Merle.

The new album features twelve tracks that are inspired by Pinto’s lyrics from personal and intimate emotions, but also can relate to most listeners, from the betrayal of a friend, the burning of Notre Dame Cathedral (Paris – France), climate change, violence against the LBGT community, confinement during COVID, and domestic violence.

“The Shadows Ball” is recommended for fans of heavy metal and bands like Battle Beast and Accept.