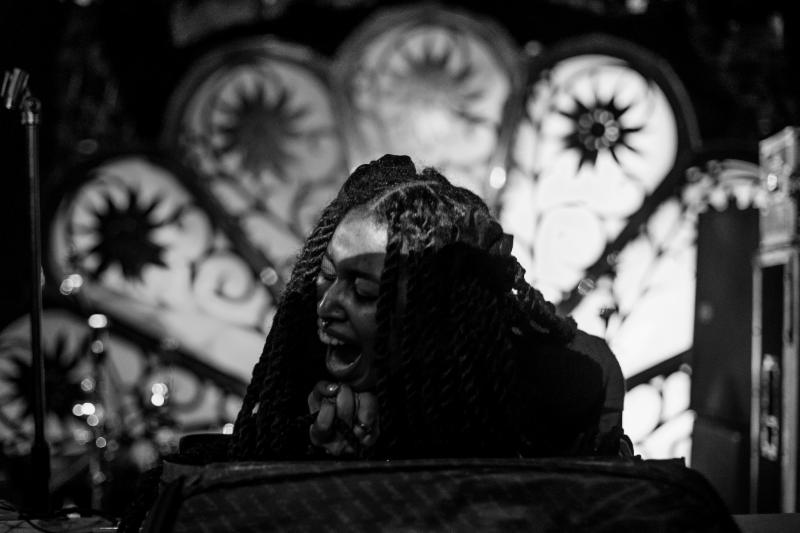 BrooklynVegan is now streaming the split/collaborative release from harsh/ambient noise acts solo outfits MANY BLESSINGS and PULSATILE TINNITUS. The stream of the full album is running just days ahead of its official release through Anti-Corporate Music this Friday.

MANY BLESSINGS + PULSATILE TINNITUS delivers an hour of menace, leading with a monstrous collaborative track, after which two individual tracks from each artist take turns dousing the listener with their tortured auditory attacks, creating a seamless excursion in droning noise.

With the album stream, BrooklynVegan writes, “Anti-Corporate Music is releasing the new split/collaborative album from noise/ambient acts MANY BLESSINGS (aka Ethan McCarthy of sludge trio Primitive Man) and PULSATILE TINNITUS (aka Kayla Phillips, singer of grindcore band Bleed The Pigs). The album starts with a nearly-fourteen-minute collaborative song from both artists, and then offers up alternating solo tracks, with two from each artist that all pass or near the ten-minute mark. It’s an album that focuses more on white noise than melody; it kinda sounds like the sounds in Eraserhead when no one’s talking…”

Explore and endure the MANY BLESSINGS + PULSATILE TINNITUS album in full via BrooklynVegan RIGHT HERE.

The album will see cassette and digital release this Friday, August 9th. Preorders are live at the Anti-Corporate webshop HERE.

Denver, Colorado’s MANY BLESSINGS is the creation of one Ethan McCarthy of decimating low-end sludge/metal trio Primitive Man. With this outfit, he delves into the tortured realms of harsh noise, with swirling, monolithic tones and layers of scathing effects. With several singles/remix projects and an album having seen release in digital and/or cassette format since 2015, McCarthy delivers his most demoralizing solo tracks yet with this title. Following the collaborative lead track, “Many Tinnitus,” MANY BLESSINGS offers the nearly eight-and-a-half-minute “Isolated” and eleven-minute “Everything Against You.” McCarthy also handled the artwork for the release.

Nashville, Tennessee-based PULSATILE TINNITUS is the solo project of one Kayla Phillips. Known for her explosive vocals fronting grindcore outfit Bleed The Pigs, with this outfit the artist explores more ambient and spacious soundscape textures and waves of harsh noise. Since 2015, she has independently created and released a plethora of digital singles and albums, yet her work here is at its most expansive and crucial. Phillips follows the collaborative opening song offering “An Echo For The Future To Take Care Of” and “Bloodworm,” each clocking in over twelve minutes in length.