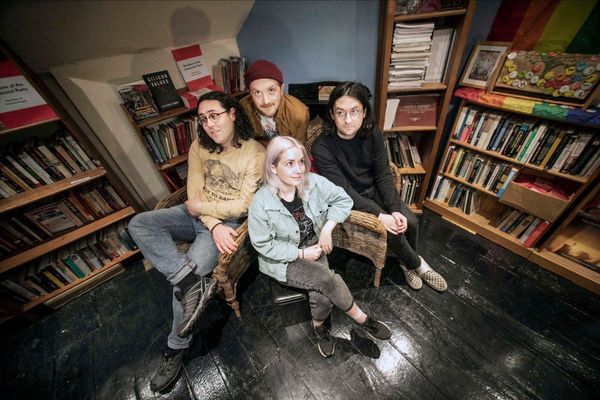 Martha return with new single ‘Please Don’t Take Me Back’

Indie-tinged pop-punk quartet Martha have made their much-anticipated return with a brand-new single, alongside the announcement of a 7″ to be released via Specialist Subject on 24th June, available for pre-order now.

‘Please Don’t Take Me Back’ is a song about refusing to let rose-tinted glasses distort your visions of the past.

“The really good news is that the future appears to have been totally cancelled by the loathsome politicians, oligarchs and CEOs hell bent on destroying the planet and all life on it, so we probably won’t have to put up with this garbage for much longer anyway. Please don’t take me back.”

The 7″ B-side features a rough and ready cover of My Heart is a Drummer by beloved Australian/English indie-pop mainstays Allo Darlin, who Martha supported at their first ever London show in 2012. The Durham band also recently announced their biggest headline show to date, at Hackney London’s EartH, alongside a full UK tour in November and December.

Martha have played a vital role at the forefront of the UK’s DIY punk movement since their acclaimed debut album Courting Strong in 2014, having since released two further albums and a handful of EPs and singles alongside UK and US tours with Joyce Manor, Radiator Hospital, Jeff Rosenstock and appearances at Glastonbury, End of the Road, Latitude, Indietracks and more.

The accompanying music video for Please Don’t Take Me Back was filmed in Newcastle, directed by Sonny Malhotra (Elstree 1976). Laura Kovic (Fortitude Valley, Tigercats) stepped in at the last minute to perform the role of ‘Daniel from Martha’ in the video after he was unexpectedly needed elsewhere.

“In a genuinely terrifying twist of fate, just before we were due to shoot the video, [band member] Daniel’s partner Steph unexpectedly went into labour a whole seven and a half weeks before her official due date. Daniel therefore does not appear in the video. If you look very closely you might see how low-key terrified the rest of us look, which sort of fits the tone of the song. Austin Ellis Bartle was born on the 21/10/21 and after a slightly bumpy start, is now a healthy, happy little fella.”

Talking about the 7″ B-side cover of My Heart is a Drummer, the band said; “Martha played our first London show supporting Allo Darlin in 2012 and we love them. We performed this cover at Indietracks (RIP) in 2019, and we also played it on the piano stage at End of the Road that year and some professional looking people seemed to be filming it, but they never put that footage online, so we wanted to record it for posterity.”