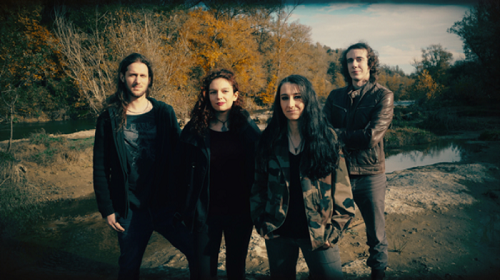 Toulouse-based Melodic Death Metal unit Aephanemer, who burst into the Metal scene in 2014, have signed a worldwide record deal with Napalm Records. With their debut EP “Know Thyself,” followed by the first and critically acclaimed full-length “Memento Mori” in 2016, the band quickly began to grow a loyal fanbase and already left their big stamp in the current extreme Metal scene and beyond. Integrating musical elements from Scandinavian Melodic Death Metal, Slavic traditional music, and classical symphonies, Aephanemer delivers such fresh and modern sound that could likely see them influence a whole, new generation in metal.

After two years of songwriting and countless live performances, including a show at Wacken Open Air in 2018, Aephanemer has not just released their sophomore album, Prokopton, in March 2019, but have already gained the attention by leading Rock and Metal label Napalm Records:

“Over the course of 3 year, I have been following Aephanemer and always impressively admired this French band style of Melodic Death Metal.“ A&R Sebastian Muench comments. “Napalm will re-release the unbelievable album “Prokopton” during late 2019 and fans of Wintersun, Children of Bodom and Ensiferum should get excited! “Bienvenue” to the Napalm family!“

Says the band about their recent signing: “We are more than happy to announce we have signed with one of the leading heavy metal record labels, and the house of many bands we love: Napalm Records! After five years as an independent band, we are committed to getting the most out of this opportunity to reach the next level and focus on our dearest duties: creating music, playing it live, and meeting our supporters! Many great things are coming!”

Set for a re-release on Vinyl and CD formats in late 2019 with Napalm Records, watch out for more news on Aephanemer to follow in the days ahead!