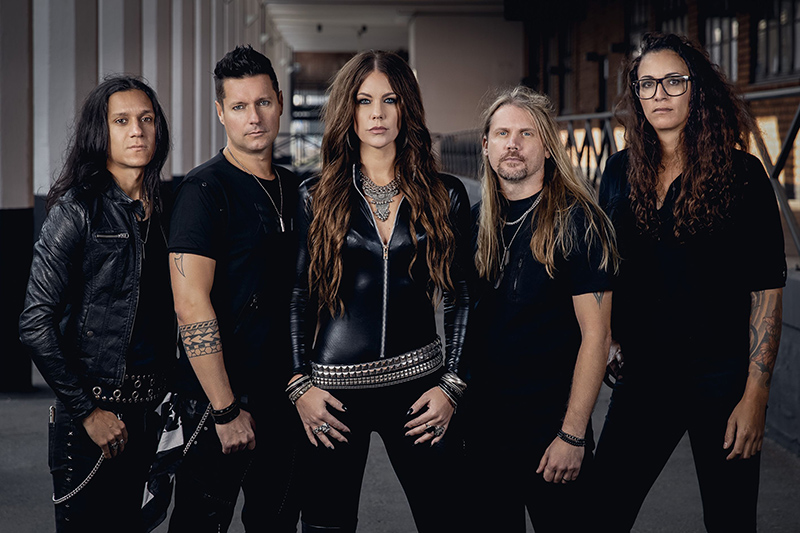 The update for modern power and melodic metal will be coming sooner as expected – with a new album called ‘A Virtual World‘, the Swedish power metal quintet METALITE returns to the metal dancefloor. Not even a year & a half after they returned with their new singer Erica Ohlsson, who brought in a massive amount of energy and musicianship to increase the impact for the new heroes of modern metal, trendsetting, epic and of the highest quality.

This match made in heaven has been celebrated with an album that – even for Scandianvian standards – could be called a rarity. Their opus ‘Biomechanicals’ (2019) was influenced by the concept of bands like Within Temptation, Amaranthe and Delain but at the same time the band from Stockholm reinvents classic Melodic Metal – unleashing a storm of power and  zeitgeist that you cannot escape.

Like they started on ‘Biomechanicals‘, the Swedes continue to expertly make use of electronic elements, influenced by the Trance Era of early 21st century: spheric layers mix with vibrating sequences and pulsating beats fitting like a second skin for the massive, melodic and outrageously catchy wall of sound.

Guitarist Edwin Premberg states: “We see ourselves as a modern band that works differently than most of the Melodic Metal bands out there”.

They absolutely do, and they are extremely successful with the musical formula and the niche they have found for themselves. Excellent songwriting and catchy hooks empowered by base of sweeping synths and held together by a voice simultaneously strong and light at the same time. This is something only METALITE does these days and they do it gorgeously, refined by another high-end production of Jacob Hansen (Volbeat, Amaranthe a.m.m.)

A new album is always a chance to go for new lyrical issues and horizons – METALITE have found a topic that is as inexhaustible as much as technological innovation holds unexplored and unexpected possibilities for the future. And so they continue to draw a picture of a modern utopia on ‘A Virtual World’, not as dark as their previous album, rather showing more hope and perspective of how our future world can – and should – look like.

METALITE is more than ready for the release of the third full-length effort – are you too?