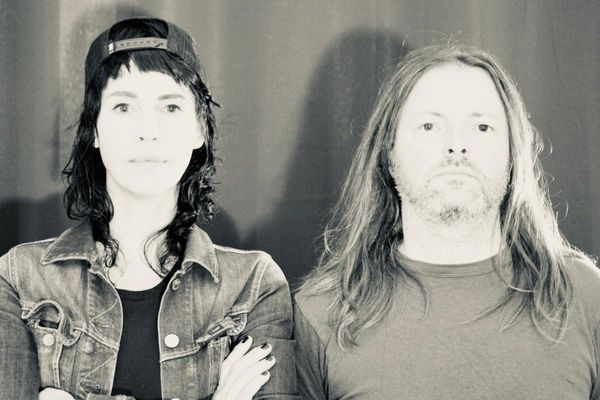 Hannover, Germany’s ethereal post-rock/doom duo MIGHT will release their second LP, Abyss, tomorrow through their allies at Exile On Mainstream. Preceding its official unveiling, trusted music portal The Obelisk is hosting an exclusive stream of the entire album.

MIGHT’s Abyss was entirely recorded, mixed, and mastered by the band, vocalist/ bassist/pianist Ana Muhi and vocalist/guitarist/drummer Sven Missullis. Delicate piano sounds are being buried under thick, viscous lava of distorted guitars and a mean bass. Hovering above it, Ana’s subtle, yet haunting voice connects tragedy with hope in a world gone haywire. Or seems like it. Sometimes she must scream

The album’s cover is fitted with a 1976 oil painting by Polish artist Zdzisław Beksiński. The impression of the painting, as oppressive as it may seem at first glance, nevertheless radiates a warming confidence and security. This makes the image a fantastic visualization of MIGHT’s music, which is a mandatory listen for fans of Chelsea Wolfe, Emma Ruth Rundle, Jarboe, Dolch, Treedeon, Neurosis, Ides Of Gemini, and Black Mare.

Muhi reveals, “I am grateful that we have the chance to release our new album called Abyss. This world is a beautiful place. But we’re all standing on the edge of an abyss. Human rights violations, racism, climate change. It’s an individual decision not to be part of that hate. Everyone can contribute to stop this absolute madness. That`s what it’s all about. Music is a way to get in touch and jump over that damned fucking abyss. At least to have a blast before we die in pain.”

Missullis adds, “We are very happy to work again with Exile On Mainstream and our good friend Andreas. For us it was never a question, and it may not have been for him either, because he had not heard a single tone until we sent the finished master for pressing. Using the artwork was a dream come true, especially for me. I am a huge fan of Zdzisław Beksiński. I dreamed about using his painting – the one we used for our album – and showed it to Ana. She also fell in love with it. So, I got in contact with the Historical Museum in Sanok which owns the rights of all works of Beksiński, who sadly was murdered in 2005. The director of the museum, Jarosław Serafin, is a very nice person. He gave us the license for using the painting. Bam!

“The recording process was intense but also stress-free, which doesn’t mean there was no chaos, but we have our own studio and so time doesn’t matter. We can record whenever we want and how long we want. In the middle of the recording process there were these Exile On Mainstream Roadshows with Confusion Master, Gaffa Ghandi, and MIGHT. At that point we didn’t want to play any of the new songs live, so we had to rehearse our first album in the middle of recording a new album. That was a bit strange but also refreshing and we made a two-week break from the studio. Besides the release, I am very much looking forward to the next shows in September where we will play those new songs for the very first time.”

The feature at The Obelisk details Abyss in a rigorous track-by-track review, noting how the record, “bears the marks of a purposeful creative progression, as Ana Muhi and Sven ‘Missu’ Missulis steadily work themselves into a varied succession of genres, later declaring, “one can’t and won’t argue with either their mournful, angry, curious or disappointed points of view here, as well as the varied means through which those are brought to bear.”

Stream MIGHT’s Abyss in its entirety first now at The Obelisk RIGHT HERE.

Abyss will be released through Exile On Mainstream this Friday, August 26th, on LP and CD and available on all digital services. Find preorders HERE, and watch the videos for “How Sad A Fate” HERE and “Shrine” HERE.

Watch for additional videos to be issued surrounding the album’s release.

MIGHT was formed in January 2020, in the early days of the Covid-19 pandemic, and the band immediately recorded their eponymous debut LP, introducing their blend of elements from various musical genres fused in their very own intoxicating, organic sound.

Between instrumental frenzy and gentle, fragile acoustic parts, an exchange takes place that musically brings together different genres: black metal, sludge, doom, post-rock, shoegaze. The whole thing happens without any showmanship, loud and quiet in perfect complement, the power of love as an answer to life’s questions.

As large as the steps may seem at times, they always remain comprehensible. The common thread consists of the consistent and honest handwriting of the two – an uncompromising couple.

Unfortunately, due to the pandemic, MIGHT could not play live as much as they wanted to in support of the debut LP, but they have made waves with some very special performances over the past year or more.

Highlights so far include the 2021 Roadburn Redux Festival appearance, where MIGHT played their second concert ever, the 2022 Exile On Mainstream Roadshows, as well as support for Wiegedood and the 2022 Rotormania Festival appearance. Live, the couple takes a unique approach, with Missullis performing drums while broadcasting video projections of him also performing the guitar parts, doubling his appearance, and thus becoming a trio.