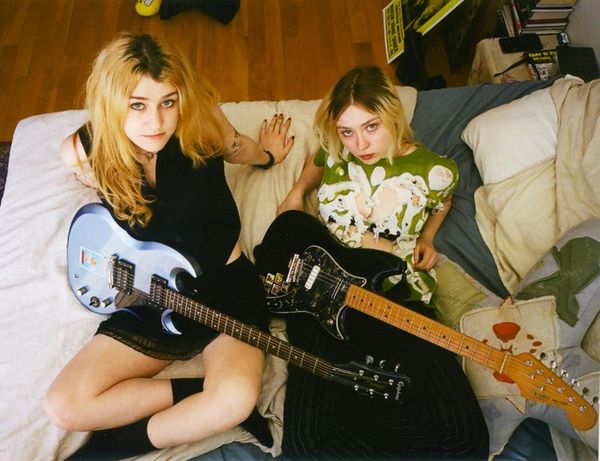 The day is finally here! Momma’s absolute ripper of an album, Household Name, is out now. Filled with fuzzed-out guitar and lyrics that don’t hold back, Household Name is set to be an instant classic. With the lead single “Speeding 72” ranked as the #4 song of 2022 (So Far) by SPIN and one of the Top 50 via Consequence, Momma are ready to take the world.

Grab the Red vinyl packaged in a deluxe gatefold jacket from your local record store, or pick one up from the Polyvinyl store. (Word to the wise – this weekend is your last chance to place an order for any physical version of Household Name and receive a FREE 8×10″ zine designed by the band!)

Celebrate the album release by watching the brand new “Motorbike” music video directed by Emma Penrose and Zack Shorrosh. Grab your bolo tie and banjo and get ready to jam.

Momma just dropped their latest anthemic earworm “Motorbike” the final single ahead of Friday’s release of their highly anticipated new album Household Name. Pre-order your copy now alongside some Momma-merch for the road and beyond. “Motorbike” follows “Lucky” and the critically-acclaimed fuzzed out lead single “Speeding 72” which was recently ranked the #4 Best Song of 2022 (So Far) by SPIN, and Top 50 via Consequence. Other album tracks “Rockstar” and “Medicine,” saw features from the likes of Stereogum, SPIN, and NME, plus The FADER‘s 20 Best Rock Songs Right Now.

The track is accompanied by an Emma Penrose & Zack Shorrosh-directed video, which mirrors the song’s themes of romantic fantasy. “I wrote this song about a boy I had a crush on who really wanted nothing to do with me,” explains Allegra, who sings lead vocals. “The song is basically just fantasy—even though it’s about a real person, it’s also about how we can make up elaborate ideas of who other people are in our heads, and get so caught up in these fake scenarios that they kind of end up feeling real. I wanted the song to feel like you’re escaping something, because my daydreams about this boy and his motorcycle were definitely an escape from my life at the time.”

Produced by Aron Kobayashi Ritch and mastered by Grammy-winning engineer Emily Lazar (The Killers, Maggie Rogers), Household Name is Momma’s first full-band collaboration recorded in a proper studio that sees the band skillfully carve out their own path in today’s world of alt rock. Bygone heroes helped inspire a theme throughout the album: the rise and fall of the rock star, and the tropes and tribulations that come with that arc. This allowed the band to celebrate (and, in some cases, directly reference) icons like Nirvana, Pavement, Smashing Pumpkins, Veruca Salt, and the Breeders’ Kim Deal, while weaving in their own perspective and experiences.

Across the album’s 12 songs, Etta & Allegra cull lyrical inspiration from their own lives for the first time–a contrast with the conceptual fiction of their beloved 2020 album Two of Me. “I went through a lot of changes as we were writing and demoing this record. The biggest was that I was going through a really messy breakup, which was motivation to make this record the best it could be. I really felt like I had something to prove,” Allegra says. “I wanted to write about heartbreak, which isn’t something we normally focus on in our lyrics. Etta and I ended up writing several songs on our own because we were having two really different experiences during this time. It’s the first record where we each have three songs that we sing solo on.”

Household Name introduces a thrilling new era of the band to not only listeners, but also to the members themselves. “There have been so many times where I have begun to write words to a tune, just out of pure emotion from something I experienced, and I don’t actually realize how I feel about the situation until I listen back to the lyrics after a few days,” Etta notes. “So, when an artist gets personal in their music, it seems to me that the listeners and the artist are having the same experience at once, which is a better understanding of the writer as a whole. That’s what I want these songs to give to the listener: a true introduction to all sides of Momma.”

The band hits the road this summer supporting Snail Mail, with their own headlining tour kicking off in mid-September. Tickets for all upcoming shows onsale now.