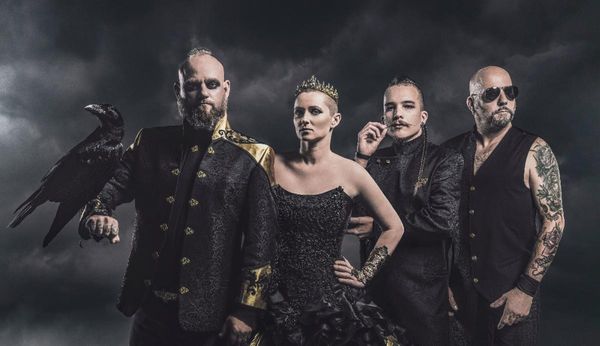 With just a couple weeks left until the release of their new album, MONO INC. have unveiled another single from the upcoming LP!

The new track from these German goth rockers, titled “After Dark” (feat. Storm Seeker), is the final offering until ‘Ravenblack’ comes on January 27.

“‘After Dark’ is the sixth single off the album, and it heralds a new era. Musically, the song is a real bombast and a clear announcement, which is brought to a head by the musical support of Storm Seeker. The Ravens are back, stronger than ever!”

Watch the Official Video for “After Dark” HERE

MONO INC. emerged from the ashes of several band projects, from the frustration of being forced in unwanted directions by major record companies, and from ardent desire to make uncompromising music.

In 2000, Martin Engler (drummer, songwriter and producer), Carl Fornia (guitar) and Miky Mono (vocals) relaunched their previous band project as Mono Inc. From 1995 to 1997 the three had already played together in the band Wild Thing and then from 1998 to 2003, initially as a trio under the name Mono69, they went in search of their own special sound.

In 2003 Manuel Antoni joined as bass player, completing the quartet, which is why the Monos call 2003 their founding year. Independently, they produced their debut album ‘Head Under Water’ and submitted it to all major labels. They were rejected consistently.

Since the band was unwilling to compromise its style for a coveted record deal, they decided in 2004 to set up their own independent label NoCut. The mechanisms of the music business were well known to Martin and Carl: Martin had professional experience as songwriter and producer under contract with EMI for various interpreters since 1990 – Carl on the other hand because he gave up his mechanical engineering studies in 1993 to join a music management company in Hamburg.

In the summer of 2021, MONO INC. played a total of eleven “corona-compliant” open-air shows of their own with changing support bands. Under the motto “We Are The Raven”, the band was happy to celebrate with their fans again and let the raven fly after a long forced break. In December, the platinum version of their # 1 charting album ‘The Book of Fire’ was released, which contains a live CD as well as all songs as instrumental versions.

At the beginning of 2022, Val Perun replaced Manuel Antoni on bass. Together with their new band member, MONO INC. made up for the long-awaited “The Book of Fire” tour in Spring 2022. Much to the fans’ delight, the single “The Raven’s Back” was released on June 17, 2022, which could hardly describe the feeling of regained freedom better. At the same time, the new, eagerly awaited studio album ‘Ravenblack’ was announced, which will be released on January 27, 2023.

MONO INC. are looking forward to going on tour with their new album in spring 2023 and then starting an eventful festival summer.

1. At the End of the Rainbow

3. Princess of the Night

5. Heartbeat of the Dead