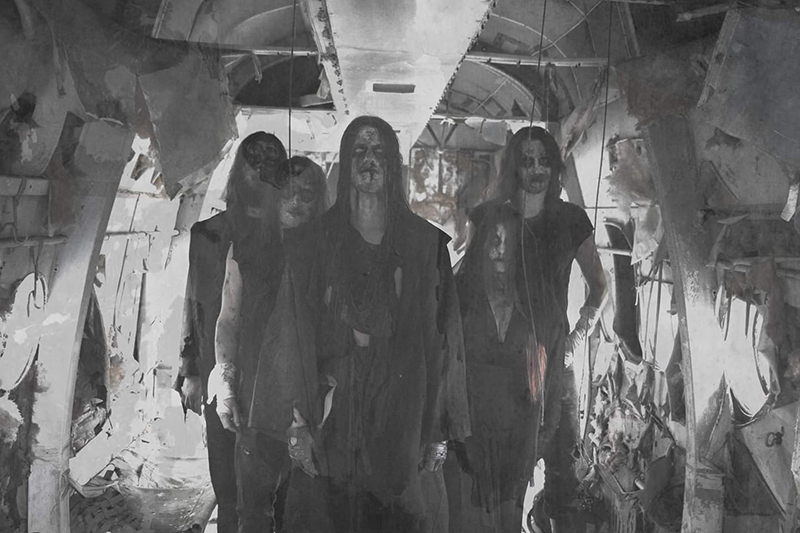 French black metal outfit Mortis Mutilati have announced release details for their fourth album “The Fate Of Flight 800“, due out September 11th, 2020.  The new album was recorded by Devo (ex-Marduk) at Endarker Studios, Sweden.  The first album “Nameless Here For Evermore” was released in 2013 via Naturmacht Productions and is the representation of founding member Macabre’s Taphophiliac fixation.

It received only amazing reviews on the web; this is what gave Macabre the motivation to form a stage band, with the help of session musicians.
Then Mortis Mutilati started touring around France with huge quality bands such as Sombres Forêts, Mortifera, Nocturnal Depression etc… and Macabre even performed as a guest with Nargaroth.

The following year, the band entered the studio to reopen the coffin with “Mélopée Funèbre“, an album written in 2014 under the influence of Death and eroticism; in one word, necrophilia. This album is way more professional than the first piece “Nameless Here For Evermore” as it has an amazing staff. Recorded at the Unchained Wolf studio, mastered by Devo of Marduk and with artwork by the Italian artist Asphodel.

On side of that, Macabre serves or served in others acts such as Griffon (bass), Moonreich (bass), Neptrecus (bass), Septentrion (guitars), Gratzug (bass), Charogne (various instruments) and Procession Of Death (guitars, bass, drums).

Mortis Mutilati is a French black metal band created by Macabre in 2011. After two albums released via Naturmacht Productions, the band started touring a bit everywhere in their home country then self released ”The Stench Of Death” in 2018, allowing the band to reach euopean countries and Mexico. Mortis Mutilati is now about to release their 4th album ”The Fate Of Flight 800”, recorded by Devo (ex-Marduk) at Endarker Studios, Sweden.