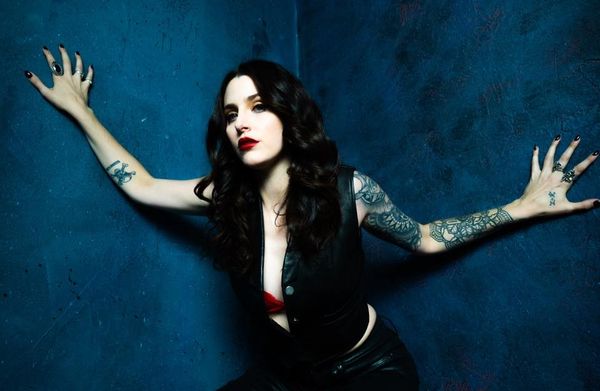 MOTIVE BLACK peels back the layers to reveal the dark and turbulent emotions that dwell in the heart of vocalist Elana Justin. In collaboration with Grammy winning guitarist / producer Nick Rowe (Bloodsimple, Vampire Weekend), the duo have reworked songs from Elana’s former New York band, taking the music in a much heavier direction.

“I’m not an aggressive person,” Elana says. “But my music is very to the core; everything goes into it. I do most of my venting through music. It’s definitely a collaboration with Nick. We feed off each other and we’ve created some really cool music. “Cellophane,” for example, is by far the heaviest song I’ve done. I don’t usually sing like that but Nick comes from a heavy background and the song is really aggressive, so it needed those vocals.

The recordings take place in a very intimate setting. I was screaming these songs half a foot away from Nick sitting at his desk. “It’s been a real treat working with Elana on this record,” Nick Rowe explains. “She is a diamond in the rough—unafraid to explore new musical territory and put her soul on the page lyrically. I can’t wait for everybody to hear what we’ve been working on!”.

The upcoming album is titled Auburn, which Justin says “is named for my sister’s beautiful auburn-colored hair. Losing her forced me to reexamine my life and make significant changes. I went through a huge transitional period which included both ugly and beautiful experiences. The album is a wild ride through that journey of anger, mania, deep love, and self discovery.”

In addition to the vocal prowess of vocalist Elana Justin, the album features Nick Rowe on guitar, bass and co-songwriting credits; drummer Ray Luzier (Korn) on six tracks; guitarist Marcos Curiel (P.O.D.) on the first single “Broken”; and “special guest” Carla Harvey of Butcher Babies on the song “Lift Me Up”.

Harvey also co-starred in the video for that track and says: “I love collaborating with strong women on projects so when I was asked to add my vocals to “Lift Me Up”, I happily obliged. The result…an infectious tune, a new found friendship…!“

Nils Wasko, who signed the band to AFM Records says “Motive Black combine honesty and attitude. Their powerful songs and the expressive vocals make them exceptional.” “It’s interesting to be signed,” says Elana of joining the AFM Records family. “I don’t have a huge following at the moment because MOTIVE BLACK is a brand new project, so am glad the music resonated so deeply with Nils. That sort of interest is gonna pull me through.”

The MOTIVE BLACK debut album will be released on 10th February 2023.