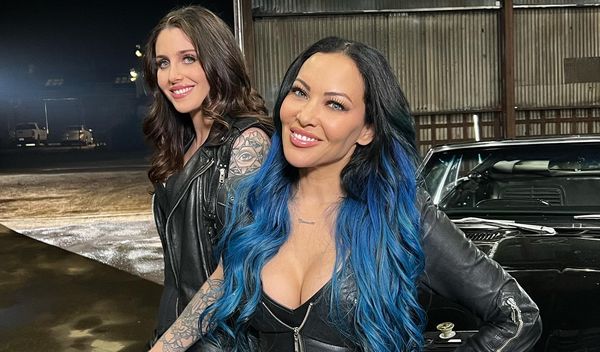 Watch the new MOTIVE BLACK video for “Lift Me Up” HERE:

The powerful music video for “Lift Me Up” features the red hot synergy of Justin performing together with Butcher Babies’ Carla Harvey in a street fighting sequence fans will want to view on repeat. Elana Justin explains: “I wanted the video to focus on female strength.

The director and I worked together to come up with an idea that spoke to that. It was also fun to step out of my comfort zone and try something new. I’ve never done anything combat related so it seemed like it would be a fun avenue to explore. The director, Dale Resteghini, also directed the video for “Broken.”

I’m a Butcher Babies fan, so when the song was played for Carla and she agreed to perform on it I was super excited.  Carla is a great example of a badass woman killing it in the music  industry. I think her vibe fits the song perfectly. She really added something special to “Lift Me Up.” Working together really brought the song up to a new level

I think it’s really important for people to see women working together to create music and art. We keep seeing It more and more and it’s so exciting. It’s essential for women in this industry to stick together and support each other. There is so much more female visibility in this kind of music than there was even just a few years ago.”

Carla Harvey (Butcher Babies) concurs stating “I love collaborating with strong women on projects so when I was asked to add my vocals to “Lift Me Up,” I happily obliged. The result…an infectious tune, a new found friendship and a ride through Compton in the sickest 1968 Firebird…the stuff dreams are made of!”

Motive Black will appeal to fans of Evanescence, Delain, Follow The Cypher, The Pretty Reckless, Halestorm, In This Moment, Shinedown.

“Lift Me Up” was produced at the legendary NRG Studios in North Hollywood, Calif. by Grammy-winning Nick Rowe (Vampire Weekend, Lamb Of God, Madonna, Snoop Dogg) and mixed by Josh Wilbur (Lamb of God, Korn, Papa Roach). “It’s been a real treat working with Elana,” Nick Rowe explains. “She is a diamond in the rough—unafraid to explore new musical territory and put her soul on the page lyrically.  I can’t wait for everybody to hear what we’ve been working on!”