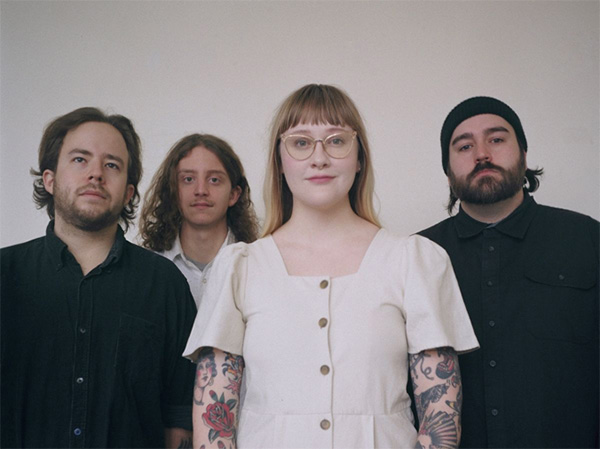 Mundy’s Bay has released a beautiful music video for their song “Sleep Away the Summer“.

“Writing Sleep Away the Summer came very naturally to me, and the lyrics are quite literal“, says vocalist and keyboardist Esther Mulders. “I was daydreaming about my partner, and how much I love him. I think we wrote the song in the summer, and it was before he moved to Montreal so I felt homesick when he wasn’t there. I would often daydream about nice small moments we had, and the song pretty much wrote itself“.

The song is taken from the band’s debut album Lonesome Valley out now through Pure Noise Records. It was recorded by producer/engineer Kurt Ballou (Converge, Joyce Manor, Code Orange). Fans can stream or purchase the album through their preferred platforms.

The members of Mundy’s Bay (vocalist/keyboardist Esther Mulders, guitarist Victor Beaudoin, guitarist John Donnelly and bassist Will Love) met in Montreal’s punk and hardcore scene, but set out to form a band with no stylistic confines. That highly collaborative and open approach to writing, along with a shared love of ’80s and ’90s musical touchstones, forms the band’s core sound. Mulder’s serene vocals guide the listener through dream-like explorations of love, loss, and longing, whether she’s singing overtop of chiming guitar passages or waves of reverb-drenched distortion and winding bass lines. It’s an impressive debut sure to please fans of moody post-punk and shimmering guitar pop alike.