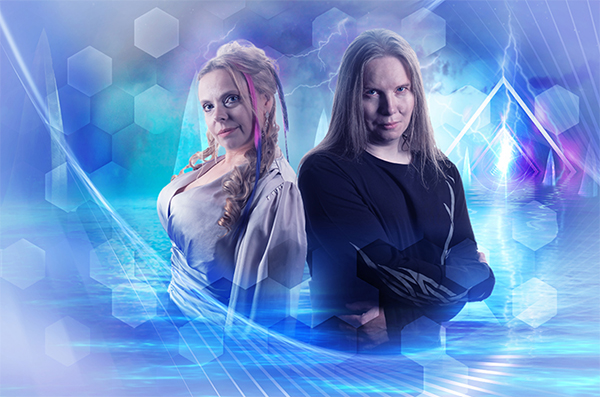 Having stirred up the scene in 2019 with the debut album “Finally Free” released via Dr. Music Records, which also achieved international success, and acclaimed live shows, the extraordinary melodic metal formation NEVARIA from the Bavarian city of Bayreuth now, after the pandemic-induced break, announces the new single with “Reckless” for February 03, 2022.

Now acting as a duo, the musicians Tanja Schneider (vocals) and Markus Spiethaler (keyboards) carry on their vision of catchy female fronted melodic metal and enlisted support for the recording from guitarist Kim Wölfel, who already played on the debut, as well as Daniel Unzner (Dislocated Theory; Ex-Profanity), who recorded the bass with nimble fingers.

The young, untamed metal guitar work in combination with dynamic drumming, a perceptibly powerful bass and graceful keyboard melodies, is thereby completed by the vivid, brilliant vocals of the former Dawn Of Destiny vocalist.

Without leaving the chosen path, NEVARIA refreshingly evolved its independent sound with elements from electronic music and “Reckless”, like the album before, was mixed and mastered by André Hofmann (Nothgard, Wolfchant, New Hate Rising).

Focusing on just two songwriters provides a real boost in creativity and the mix of hard guitars and refreshing, electronic vibes, enthroned by Tanja Schneider’s imposing voice, is impressively convincing. Driving synthie arpeggios, which already take on house or trance-like features, are paired here with beats and natural harsh guitar riffs, which provide the necessary hardness.

More about the new sound design is shared by the singer herself in the liner notes clip. A first sneak peek of the impressive mix of music and lyric video produced by VeryMetalArt video artist Andy Pilkington (Orden Ogan, Visionatica, Van Canto) for the new sharp-tongued single “Reckless” can be watched now in the following teaser: https://youtu.be/WwNBjBt-SYc

As of now, you can pre-order NEVARIA’s single “Reckless” or pre-save it here: Spotify Pre-Save| Amazon (DE) | Amazon (US) | SMStracks | Apple Music & iTunes

Founded in 2018 by vocalist Tanja Schneider and keyboard player Markus Spiethaler, NEVARIA have already gone through different musical careers, gaining first experiences in the music business with European tours and support gigs with bands such as Xandria, Axxis, Sabaton up to various CD releases.

Shortly after, the songwriting for the debut “Finally Free” began, whose lyrics deal with death and solitude, mistreatment, social cooperation, disease, love and desire, each from the affected person’s point of view. The meaning of the lyrics should be ‘magical’ and follow the motto that the listener can find himself and his own story in them.

With this credo in mind, NEVARIA composed the eleven songs on “Finally Free” in a way that was as varied as it was intense and recorded the appropriate sound in Markus Spiethaler’s Soundwerkstatt.

Thanks to the stylish artwork designed by Jan Yrlund from Darkgrove Design (Battle Beast, Apocalyptica, Delain), NEVARIA take the listener into cosmic spheres on their album, but also fascinate with the right mixture of Heavy Metal and fine melodies over which the voice literally floats.

This is especially shown by the singles released along with very successful music and lyric videos “Life“, “Finally Free” and “Drowning“, with which NEVARIA attracted attention.

NEVARIA enjoy and love their music and enthrall the audience with their passion for playing live. This could be experienced in 2019 at quite a few exciting shows where they delighted their fans at home and abroad and it is all the more gratifying that NEVARIA are now back and full of beans.

Those who now want to delve deeper into NEVARIA’s world of thoughts or want to receive the latest news about their catchy Female Fronted Melodic Metal, best head over to www.nevaria-band.com or take course to their social media profiles at www.facebook.com/nevariaofficial and www.instagram.com/nevaria_official.

For more information and insights into their musical background, check out www.dr-music-promotion.de.