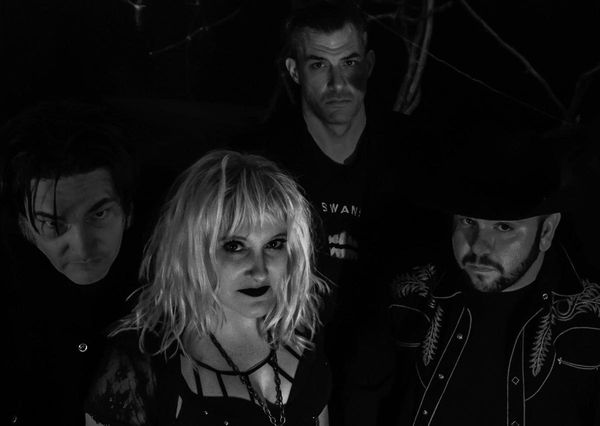 Not for the weak of heart, NIGHT GOAT delivers abrasive, slashing, dark noise rock/death rock, with elements of goth, post-punk, and doom, their barrage of sounds owing to an almost supernatural regard of classic bands of the genre like Samhain, Unsane, 45 Grave, Eyehategod, and even Sonic Youth.

NIGHT GOAT’s debut album, Milk, was released in late 2019 and received rave reviews throughout the underground. In 2020 the band followed up with a split release with good friends Ghost:Hello on European label Interstellar Smoke Records. 2021 found the band added to a Samhain tribute album, World Without End, where they delivered an explosive cover of the Samhain classic “Moribund.”

The tribute album was released by Black Donut Records, who invited NIGHT GOAT back in 2022 for the Melvins tribute LP, A Future Of Bad Men, where the band covered “Antitoxidote” which Decibel Magazine lauded as, “a sludgy mess that Buzzo would likely approve of.” These two collaborations led the label to sign the band for their second LP, Totem.

The ten new tracks that embody Totem see NIGHT GOAT at their deadliest yet. The recording lineup was embodied by vocalist Julia Bentley, guitarist/vocalist Chris Bentley, bassist/vocalist Dalin Jones, and guitarist Mike Ramone and drummer Donnie Casey who have since left the band. The album was engineered by Jeremy James at Wreckroom Recording Studio, mastered by Sterling “Spidermonkey” Hankins, and completed with artwork by Chris Bentley and Gordiart.

Black Donut owner Morey Straus states, “I’m a longtime fan of NIGHT GOAT and really honored that they chose us to release their new album. It’s their darkest, heaviest release yet.”

Chris Bentley adds, “We’ve built up a good relationship with Black Donut and we’re excited to be working with them for our new album.”

The lead single to NIGHT GOAT’s Totem, “Child Of Owls,” is now streaming at THIS LOCATION.

8. Skin Walk With Me

Having shared the stage with the likes of Christian Death, The Obsessed, Cherubs, Whores, Low Dose, False Gods, Mr. Phylzzz, and many more, NIGHT GOAT plans on staying quite busy touring regionally and beyond across the US in 2023. Stand by for live announcements to post over the weeks ahead alongside additional audio previews of Totem.