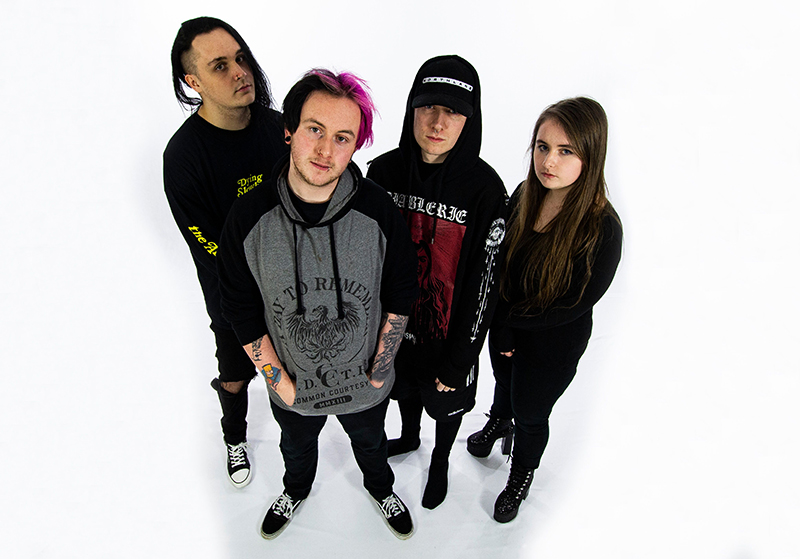 Fresh off the success of their recent single “Dopamine,” Octopus Montage are at it again. The band has today premiered their new song and music video “Voices,” streaming exclusively on Knotfest.com. “Voices” is the latest from their forthcoming album How To Live & How To Lose, set to be released on April 2, 2021.

“‘Voices’ is a 5 minute dose of unapologetic realism, outlining what it can really be like for someone who suffers from mental health issues,” shares Alex Jennings. “It serves as a reminder that even through someone’s darkest days they can not only get to the other side but also produce something that they are extremely proud of.”

Formed by brother and sister Dec and DavinaNaylor, UK-based quartet Octopus Montage fuse energetic pop-punk anthems with intense metalcore to bring a whole new meaning to the term “easycore.” The band emerged in late 2017, releasing a cover of Simple Plan’s “What’s New Scooby Doo?”’ as a halloween joke. The song has gone on to earn them over 9 million Spotify streams on the song alone. This prompted the band to release their first 8 track EP Reborn (…Again) in 2019.

Following a line up change that saw Alex Jennings take over screaming duties and Cain Dylan get behind the drum kit, the band toured regionally throughout the rest of the year playing alongside the likes of ROAM, Crazy Town, Mallory Knox, SHVPES, and InVisions. They released Catharsis EP in late 2019, featuring their summer single “Now I’m Gone,” a cover of Post Malone’s “Goodbyes,” and a handful of reworked older songs.

In the remaining months of 2019 and early 2020 the band began writing and recording their debut full-length album How To Live & How To Lose with a focus on highly confessional lyrics, bouncy pop-punk rhythms, and breathtaking deathcore-esque breakdowns. The band has racked up over 100,000 on the record’s first 4 singles: “Grow Up,” “Right Here With Me,” “A Shortcut To The Unconcious Mind,” and most recently “Dopamine.” Their new album is set to be released April 2nd, 2021.

How To Live and How To Lose Tracklisting:

1. Grow Up
2. Voices
3. Right Here With Me
4. Dopamine
5. A Shortcut To The Unconscious Mind
6. Don’t Run Your Mouth
7. Vendetta
8. Mother Tucker Dude, That Hurt Like A Buttcheek On A Stick
9. Phantom Settlements
10. Split
11. Jennifer’s Secret