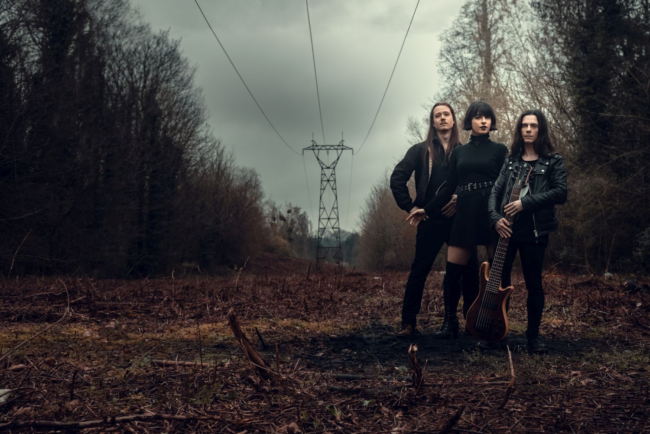 Oïkoumen was formed in 2017 with Elie Veux as composer and guitar player and Laura Mazard as singer and songwritter. Then Yael Febvray joinded the band in 2019 as bassplayer and synth programmer in 2020 after the release of the single The Green Queen.

Being influenced by big names of the symphonic, neoclassical and gothic metal bands like Nightwish, Stratovarius and Within Temptation, the band released a first EP in 2020 called Oïkoumen in this spirit with historical subjects and epic vibes.

Then, with the release of the single The Green Queen and the writing of a debut album Dystopia, the band heads toward a more brutal and progressive aesthetic with engaged, explicit and current subjects. Words which can summarise the album could be : sincere, incisive, tight, anxious and sometimes unifiying and powerful.

Drums were recorded by session musician – Clément Denys from technical death metal band Fractal Universe. Music was mixed and mastered by Flavien Morel (Fractal Universe, Deficiency). Cover artwork and band logo was done by Chromatorium (ACOD, When Reason Collapse). This album is available for listening at all major streaming platforms and as CD via BigCartel.

Band commentary about the album: “Dystopia is a concept album about the anxiety generated by news about the world. Of course, there is lots of songs about ecologic issues but it also deals with social and human issues. The beginning of the album is written with a pessimistic athmosphere and in the end it goes to more positives songs so we can end on hope.
Musically, it is more inspired by progressive metal than symphonic : riffs are complex and groovy, there is a lot of different parts, the singing is melodic but we try to break the melodies etc.“.