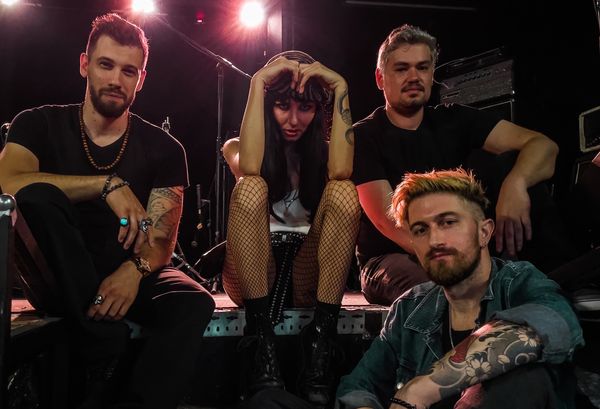 Flo started to play drums at the age of 14. Student of Mr. Jean Paul Allegrantri, a household name for drummers in Nice, perfecting his playing by playing in many local groups. His main influence is Nicko McBrain, drummer of Iron Maiden from whom he draws his inspiration.

Regarding his playing, Flo says “I make my rhythms sing in harmony with the riffs, all with originality and power.“

Drummer of Royal Smash from 2011 to 2020, Flo played at several festivals and concerts, such as the Gibus in Paris, and the first part of the Triggerfinger concerts. From 2015 to 2017 Flo was the drummer for @Bomber Strike with whom he recorded an EP.

“Today I’m the drummer of the group Onyria, meet me for this new Rock adventure, and on stage for the promotion of the latest album “Feed the Monster”!”

Raised in a musical environment thanks to his father, also a bassist, Valérian took hold of this instrument and never let it go for fifteen years.

Greatly inspired at first by the heavy metal of Iron Maiden and subsequently by everything that is prog, he dwells into hundreds of musical styles which ultimately led him to play in groups like Richter Scale (Heavy Metal), Face the Nightmare (Metalcore) and especially Pendact (Melodic Death) with whom he recorded and performed on stage the album Days Of War between 2011 and 2013.

After a few years of hiatus and side projects, Valérian crosses paths with Onyria to perform, promote and rock their new album, Feed The Monster!

Feed The Monster – the new album

Pre-Order / Pre-Save ‘Feed The Monster‘, our new album coming out July 19th. Find out more by clicking below.