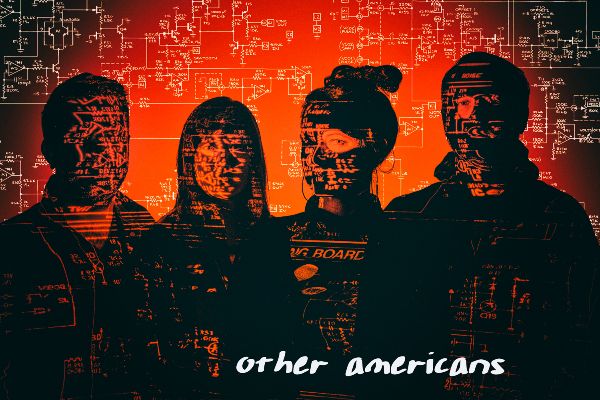 Launching a retro-futuristic attack on synth-drenched electro rock, OTHER AMERICAN’ssecond self-titled EP dives head first into the delicate balance between love and power. Featuring members of such iconic Kansas City/Lawrence bands such as The Architects, The Gadjits, Radar State, and Late Night Callers, Other Americans will be releasing the EP on October 1, 2019. “The songs on this record are mostly about having to confront the past – my own, my friends’, and my family’s,” says vocalist Julie Bernsden. “I wanted to capture the vulnerability and the emotion that comes from trying and failing in those confrontations.”

Other Americans expands on the immersive collection of songs from their first release (2018’s also self-titled Other Americans), introducing another side of the band that sees them upping the ante with slicker production while carrying the same self-titled badge. The Other Americans EP includes five brand new songs as well as three additional remixes courtesy of guitarist Brandon Phillips’ EDM project MENSA DEATHSQUAD.

The EP starts off with “Neon Sunrise,” a song that lives up to its namesake, invoking an 80’s-splashed ride at dawn in a convertible with the top down, basking in the early morning glow. “Salt Mines” takes things in a darker direction but still wears its nostalgic synth-influenced electro-pop vibes on its sleeve. Julie’s ascending vocals plead with a loved one on the verge of leaving, before phasing into a breakdown of infectious la-la-las in the chorus.

Other Americans continue to prove they have hooks for days, following this up with the early 00’s rock swagger of “Runaway King” whose chorus will drill into the head of any listener. The pulsating and visceral House-inspired “Memory” is perfect for the midnight dancefloor crowd and showcases flashes of A-Trak and Tiësto, as well as the shady saw-toothed closing track “Ship Of The Desert” that spotlights Julia’s sultry vocals alongside pounding synths that give the track an aggressive edge.

Other Americans have truly hit their stride on this release, hearkening such acts Garbage, Goldfrapp, and a pinch of Yeah Yeah Yeah’s (especially on “Runaway King”) in one cohesive package, emerging with a unique voice all their own.