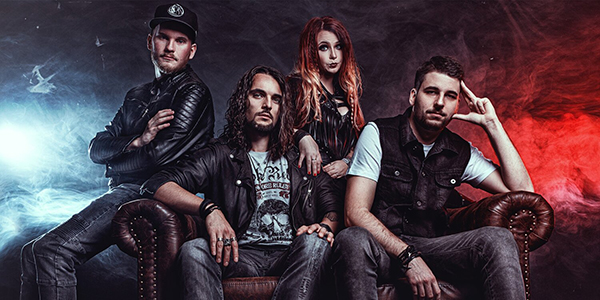 The good news for OVERSENSE don’t stop after the release of the latest album “Egomania” in September via Dr. Music Records.

Just a week ago, the modern melodic metal band revealed joint shows with Metal Queen Doro Pesch and their friends from Snow White Blood. Now, OVERSENSE announces that the band will go on European tour in early summer as main support of Manticora.

Playing a total of 16 shows together in Germany, the Netherlands, Belgium, France, Austria and Switzerland, OVERSENSE will captivate their old and new fans and take them on a fascinating journey through all facets of powerful Modern Melodic Metal with unique musical highlights.

Here is an overview of OVERSENSE’s confirmed tour dates so far:

OVERSENSE, one of the most emerging bands the European Metal scene has to offer, holds up its distorted reflection to the world with its sophomore album.

Thematically perfectly fitting to the ongoing global political chaos, Fridays for Future and the current social media madness, it zeroes in on e.g. faceless fashion and beauty influencers without rhyme or reason with its eleven songs, skillfully packed in brilliant, majestic and catchy modern Melodic Metal anthems.

Thereby, OVERSENSE have stylistically evolved and captivate with a more modern, harder sound that fascinates with musical experiments. This is shown not least by the three already released singles along with their accompanying music videos.

The band around the charismatic frontman Danny Meyer, YouTube star guitarist Jasmin ‘Jassy J.’ Pabst, bass player Marco Volpert and drummer Patrick Lippert belongs to the hottest Modern Melodic Metal acts of the last years, not only since the several weeks’ tour with Doro Pesch in 2018!

OVERSENSE creates a unique sound in the form of fat headbanger riffs, filigree solos and melodic anthems with the potential to make a huge impact on the international Metal scene.

With “Egomania”, the band delivers more than an impressive album, which has been released as a noble Digipak, as a deluxe edition and of course digitally via Dr. Music Records.

On “Egomania” OVERSENSE manage to refine the strengths of the debut significantly and to reach the next level sound-wise. The album is a perfect Modern Melodic Metal masterpiece, with which the four musicians will win over both the young metalheads and the veterans of the scene. OVERSENSE have everything a young band needs.

Besides great songs with catchy tunes, especially exceptional talent Jassy J. on guitar, whose YouTube channel JJ’s One Girl Band now has almost 285.000 fans around the world, and singer as well as songwriter Danny Meyer with his unique voice stand out.

This is also proven by the numerous press feedbacks from all over the world: www.dr-music-promotion.de/?p=16590/#press

The brand-new OVERSENSE album “Egomania” is a must-hear for every Modern Melodic Metal fan available at all known digital stores and streaming services.

For the collector’s heart, the album has also been released as a six panel digipak CD as well as in the magnificent limited deluxe edition consisting of the digipak with 16-page booklet in a noble box with a USB stick featuring an exclusive piano version of “Love” as MP3, a DIN A2 band poster, a signed autograph card, a postcard as well as stickers.

Of course, a trip to the band’s website at www.oversense.de is also recommended. Get further details on the release of “Egomania” at www.dr-music-promotion.de.