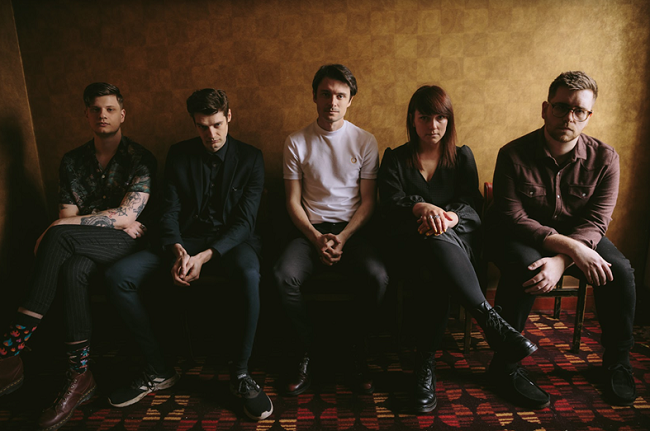 With a rawness that owes influence to the North East coast they call home, Pit Pony are a caustic, fuzz-rock five-piece from Tyneside that create an adrenaline fuelled, full throttle soundtrack for singer Jackie to explore tales of political ineptitude, mental health, motherhood and failed relationships.

Today they release their debut album World To Me, which explores themes of identity, isolation, anxiety, motherhood and although not intentionally, the impact of the pandemic on us all. Armed with lots of new music and a bigger sound, the band are back with the bite between their teeth and ready to move.

Songs like ‘Tide of Doubt’ and ‘Black Tar’ are quite visceral which Jackie describes as an “outlet for the pent up anxiety of isolation and the what seems like constant bad news coming at us from all angles”. ‘World To Me’ and ‘See Me Be’ explore the experience of having a baby and navigating life after that. ‘Best Is Yet’ is more of a love letter to Jackie’s younger self, with ‘Supermarket’ and ‘Cold’ exploring themes of complex relationships and self preservation.

Despite a relatively modest back catalogue of just a handful of singles since forming in 2018, Pit Pony have received support from BBC Radio 1, BBC6 Music, Radio X, Amazing Radio with DJs including Steve Lamacq, Mary Anne Hobbs, Huw Stephens and John Kennedy getting on board early.

In the last 12 months the band played 3 sold out headline shows in Newcastle, supported IDLES at their sold out Newcastle date, supported The Wedding Present at the O2 Academy in Leeds, supported LIFE on their UK tour and before that, sold out of copies of their first 7” for single ‘Hard Rainfall’.

The band have been supported by PRS Foundation and Help Musicians to create their debut record, released via Clue Records (Bored At My Grandmas House, The Wedding Present, YOWL, Team Picture).

In support of the release, the band will also set off on a small run of UK dates later this year.

World To Me out now via Clue Records Listen HERE