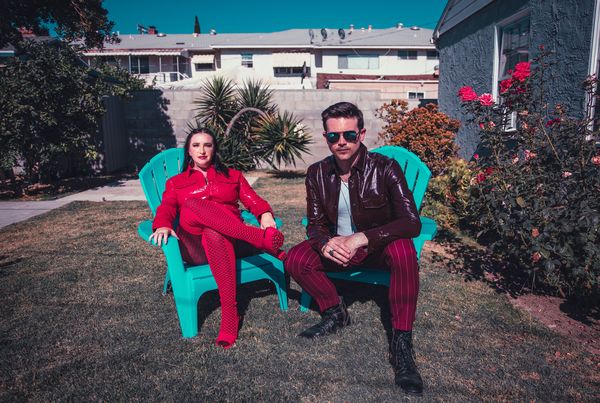 “King” was recently featured on Spotify’s Editorial Playlist “All New Rock,” alongside high media praise and featured on 95.5 KLOS’s Heidi and Frank show ‘Stay Or Go’.

Plastic Rhino states: “‘Scream So Loud’ is about how us ladies are beyond over and done with toxic male dominated energy in our lives. From having things “Mansplained” to us over and over, to men in general doubting our talents and efforts in contributing to society. We are constantly questioned whether we have the knowledge on certain subjects we talk about, as well as our talents and power”.

LISTEN  TO “SCREAM SO LOUD”

Plastic Rhino was formed in 2012. Raised on 70’s Progressive Rock, 80’s Hair Metal, and 90’s Alternative Grunge, the pair breathe rock music. When the two of them met in 2011, a strong friendship was formed based on a mutual love for All things music and going to see live shows.

The band started playing around town as an acoustic cover act, while writing their own music. Drawing from influences such as Alice In Chains, Muse, Soundgarden, and Queens Of The Stone Age, the band continue to shape their sound.

In 2013, they stepped into the studio to create their debut EP Confessions Of A Nobody. Having no clear concept, what became of it was a vast array of music styles and ideas. They formed the band Plastic Rhino and gigged around town, introducing themselves to the music scene.

In 2014, they met Tom Chandler, a rock producer who worked with many local and national bands at a show. They decided to collaborate, and Let’s Begin, their second EP, was released. The EP narrowed the scope of the band’s sound towards 90’s alternative female fronted bands such as Garbage, No Doubt, and Veruca Salt.

The EP garnered local and national attention from many media outlets, giving the band a larger online footprint. Plastic Rhino decided to go back into the studio in 2015 with Chandler to create an even heavier rock sound for the band.

After so many years of hard work, the band hit a plateau. Jack joined other rock bands, and Atara went solo. In a blink of an eye, 5 years had passed, and Plastic Rhino found themselves stuck at home in a pandemic bored and looking for a creative outlet. The songs started writing themselves in a way, and Jack and Atara had 15 new song ideas.

They reconnected with Chandler once again, and the next album was created. Terminus is 9 ambitious hard rock songs, and Plastic Rhino’s best work yet. Each song it’s own voice, but the familiarity of Plastic Rhino is still present with each.