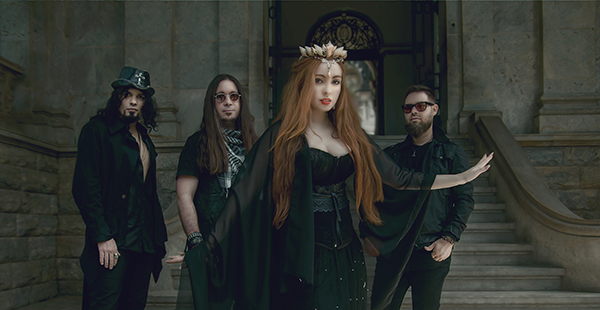 Staying at home, when possible, could help stop the virus. To make staying at home fun, Lyria is participating in several live streams during this period. On 08/27 (Thursday), the Brazilian symphonic metal band will be represented by Aline Happ (vocals) in a live stream interview on the YouTube channel of the Italian band Ravenscry.

A well-known name in Italian metal, Ravenscry has four albums released “One Way Out” (2011), “The Attraction of Opposites”, “The Invisible” (2017) and the most recent, “100”. Being on the road for more than 10 years, they now build the bridge between Milan (ITA) and Rio de Janeiro (BRA) with the interview with Aline Happ, vocalist and main composer of Lyria. They will talk about Aline’s and Lyria’s careers, addressing highlights and curiosities.

One of the greatest names in Brazilian metal, Lyria is formed by Rod Wolf (guitar), Thiago Zig (bass) and Thiago Mateu (drums), in addition to Aline. Founded in 2012, the band became known in Brazil and in countries in Europe, North America and Latin America on their debut album, “Catharsis” (2014), released via crowdfunding. Currently the band continues to release extra and unpublished materials on its official YouTube channel, in addition to participating in online festivals during the quarantine.