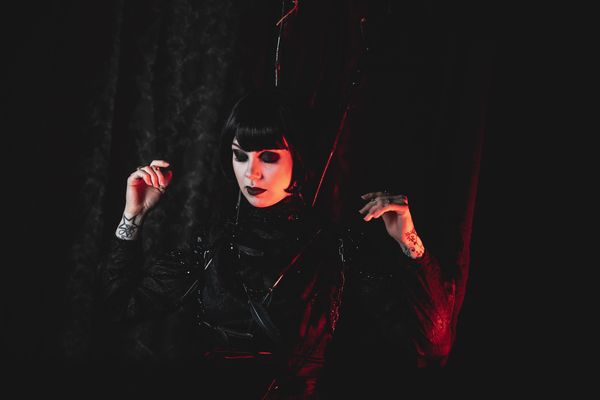 Finnish Rioghan is set to release her debut album ‘Different Kinds Of Losses’ later in 2022 via Inverse Records. The album has been made in collaboration with Jonas Renkse (Katatonia), Einar Solberg (Leprous), Teemu Liekkala (ex-Manufacturer’s Pride, Red Eleven) and Teemu Koskela (ex-Celesty).

The third single Sight from the upcoming album is released today and a stunning music video made by Aarni Visuals can be seen here: https://youtu.be/F6NmeqkWyTQ

“Sight” brings a story to the feeling when you fantasise about revenge so much it fills your whole perspective with passive-aggressive emotion and you no longer have clear sight of other things or what is normal. When the thought of revenge consumes you slowly, maybe leading to your own demise instead of the one you’ve sought to bring down.

With this composition I had the pleasure to work with Jonas Renkse, and I was of course terrified of my own (self-alleged) incompetence but soon Jonas made me realise I actually have some good stuff going on. Jonas picked this exact poem he wanted to work on, we got into the vibe and the whole process from there was very effortless and encouraging.

This was also the first song from the album we got ready and only made some really minor arrangement additions later on.

Jonas Renkse comments:
“I’d never written a song for someone else before but when this opportunity showed up I jumped at the chance. I was already in writing mode and had everything set up. I think me and Rioghan found a starting point quickly and could just go with the flow on this one. We were bouncing ideas for a bit and then the song pretty much wrote itself.”

Rioghan is a music project performed by me, singer Rioghan Darcy. Rioghan was founded in 2019 and is based on Lapua, Finland. Rooted deeply in both gothic and progressive metal scenes, I sure should bring something interesting on the table. I started off in 2010 as a poetry and lyric writer, but in 2019 I finally wanted to add some more to the mix and decided to fleshen up some of my words with music.

Songwriting wasn’t my strong suit, so I teamed up with a few skilled writers and together we came up with a 4 song EP “Blackened Sky”, which was released in March 2021. EP got some positive attention in alternative scenes, a few interviews and radioplays internationally.

As things started rolling I decided I want to make a full length album and wanted to gather a new songwriting crew for that. Between the album demo making, we made a few cover songs with Teemu Liekkala and 2 songs from the EP “Covers II” got to Spotify editorial playlists, and have gained about 200k streams at this point.