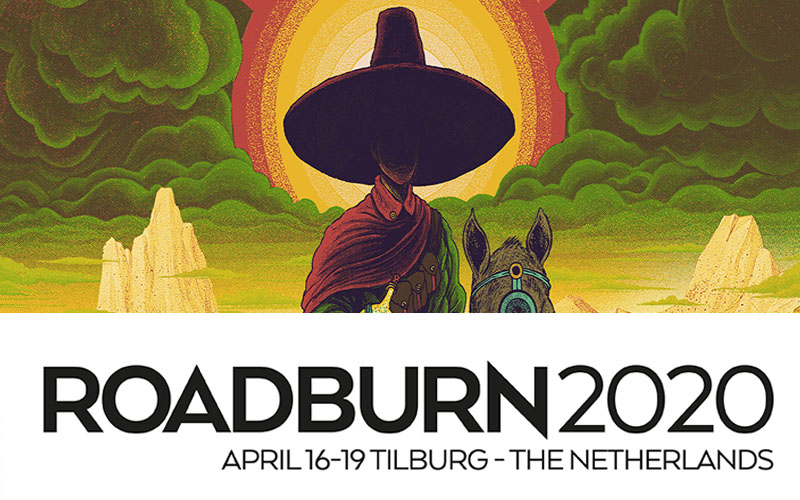 Over 3/4 of weekend tickets are already sold
Oranssi Pazuzu will present their new album as part of James Kent’s curation
Further additions to both James Kent and Emma Ruth Rundle’s curated events.

With
over three quarters of weekend tickets already sold (three-day tickets
are completely sold out), and many more bands still to announce,
Roadburn’s Walter Hoeijmakers comments:

“I am absolutely overwhelmed by the faith that people have put in us to
deliver an exciting line up. We will honour that faith and Roadburn 2020
will be one for the history books. Sincere thanks to everybody who has
picked up a ticket so far, it’s an incredible feeling..”

JAMES KENT’S CURATION:
ORANSSI PAZUZU
There are so many pieces of the puzzle that will fall into place between
now and next April, and we’re sworn to secrecy on just about all of it.
But what we can tell you is that Oranssi Pazuzu will be performing
their as-yet unnamed new album in full at Roadburn 2020, as a part of
James Kent’s curated event. It seems incomprehensible that Oranssi
Pazuzu may have evaded your attention at this point. But we’re sure
there’s a few of you out there – the uninitiated. Begin preparations
immediately, as come April 2020, there will be dark forces at work here
in Tilburg. A magical, mind-melting mangle of psychedelic avant-garde
spirits will cast a spell over us all. Read more about Oranssi Pazuzu here.

BLANCK MASS
Among the list of achievements that Blanck Mass can be proud of is
soundtracking the 2012 Olympics opening ceremony in London – and come
April 2020, Benjamin John Power will also be able to say he played
Roadburn! Whilst we might not have an audience of 900 million watching
what goes down in Tilburg that day, we can be sure to give Blanck Mass a
customary Roadburn welcome. Soundtracking the emotions that accompany
personal and societal loss, intimate and global grief – his latest
album, Animated Violence Mild, is direct, honest and absolutely drenched in melody.  Read more about Blanck Mass here.

HANGMAN’S CHAIR
Making a return to Roadburn – this time under the curatorship of James
Kent – is France’s Hangman’s Chair. The cathartic doom/post-punk
combination will be familiar to Roadburners who witnessed them back in
2016, but the intervening years have only seen the four-piece pick up
the pace. Their 2018 album Banlieue Triste (which featured
James in his Perturbator guise, and Wolvennest’s Marc de Backer)  will
be played  in full during their Roadburn performance. Sink into the
melancholic explorations of some of the darkest places they have been. Read more about Hangman’s Chair here.
EMMA RUTH RUNDLE’S THE GILDED CAGE:
MIZMOR
Mizmor’s latest album, Cairn, is a mesmerising piece of work. Back in 2016, we were bowled over by Yodh
– Mizmor’s previous offering – and we invited multi-instrumentalist,
A.L.N, to bring his project to the Roadburn stage in 2018. The set
proved to be a defining element of Roadburn that year for all who
witnessed it. Cairn is a continuation of Yodh – yet
somehow more personal, more intense and more captivating. It’s not
necessarily an easy journey, but it’s one we went on willingly. So, it is with enormous pleasure that we announce Mizmor’s return – performing Cairn in full at Roadburn 2020.  Read more about Mizmor here.

CLOUD RAT
We
already announced that Cloud Rat would be playing Roadburn 2020, but
we’re delighted to announce that they have agreed to a second show.
There are dozens of reasons why their latest offering, Pollinator,
stands head and shoulders above many other 2019 releases, and just one
of them is the accompanying EP that was released at the same time.
Performing tracks from this EP, as well as a couple of cuts from
elsewhere in their catalogue, Cloud Rat will be showing off a different
side to themselves. In order to do justice to the songs in a live
setting, the band are enlisting the help of a familiar face and dear
friend of Roadburn – Thou’s Andy Gibbs.  Read more about Cloud Rat’s second set here.

SRSQ
The haunting, sorrow-tinged melody that envelopes SRSQ’s debut album, Unreality, gives a big clue of what to expect when Kennedy Ashlyn takes to the Roadburn stage next April. Formed
after her previous project, Them Are Us Too, ended due to the tragic
death of Kennedy’s collaborator, Cash Askew, SRSQ (pronounced Seer-skew)
retains much of the magic that made TAUT so compelling. The soaring
synths and layers of swirling emotion are still present, as of course is
her lullaby-esque dreamy vocals. Read more about SRSQ here.

FVNERALS
Their 2016 album, Wounds,
is a creeping, eerie voyage through some incredibly dark shadows.
Dripping with lethargic menace and hazy atmospherics, Fvnerals paint a
sonic landscape that feels devoid of sunlight, absolute desolation
pervades. News has reached us that writing will soon commence for their
next opus due out in late 2020. Whilst Fvnerals are not a cheery
prospect, they are a strangely alluring one. We’re delighted to welcome
them to Roadburn 2020.  Read more about Fvnerals here.

BIG BRAVE & JESSICA MOSS
Big
Brave are a modern wonder – a trio of musicians that have seemingly
created their own little universe, with no need for our earthly
categorisations, no need for our restrictive genres, and no need to
stick to any kind of formula. A joy to witness live at any point, but
especially so when they’re joined by a special guest. Jessica Moss
featured on the Big Brave albums, Au De La and Ardor,
performing violin, and on extremely infrequent occasions she has
performed with the band live. We’re thrilled to announce that this
unholy union will be sharing a stage at Roadburn 2020; the stars in the
Roadburn universe have aligned and we’ve captured this most rare of
beasts. Read more about Big Brave & Jessica Moss here.

JESSICA MOSS
As
well as performing alongside Big Brave, Jessica Moss will take to the
stage a second time at Roadburn 2020 to perform her own set. Her
captivating sonic experimentation and ethereal violin playing will be an
all-consuming musical journey for Roadburners lucky enough to witness
it live. For those who appreciate the intricacies of quiet moment found at Roadburn – Jessica Moss is the show for you.  Read more about Jessica Moss here.

CRYPT SERMON
Confidently
lassoing all that is great about traditional heavy metal, straddling it
and whipping it into shape for a contemporary audience, Crypt Sermon
may just have concocted a magic formula that pays tribute to those who
have paved the way, whilst simultaneously forging a new path. It’s time
to break out your leather jacket – or if you’re feeling bold, the double
denim – and get ready to rock out: Crypt Sermon are heading straight
for Roadburn 2020 to play their new album The Ruins of Fading Light in full. Read more about Crypt Sermon here.

LANA DEL RABIES
The
origins of Lana Del Rabies may have a connection to her namesake, but
since those early days of paying a droney tribute to the pop star, Lana
Del Rabies has taken a life of its own. The project  and pseudonym of
Phoenix, Arizona resident, Sam An, blends synthesized electronics,
drone/noise elements and industrial heaviness into an atmosphere of
existential abreaction and an exploration of the occult. Read more about Lana Del Rabies here.

RED KITE
For
Roadburn 2020, we will continue our quest to bring you some of the most
exciting prog bands around. Championing the burgeoning Norwegian
psych-prog-jazz scene is Red Kite. Their self-titled debut is a master
class in progressive jams and hypnotic soundscapes, hence inviting them
for Roadburn. Read more about Red Kite here.

Weekend
tickets for Roadburn are on sale now (3-day tickets are sold out,
4-day tickets remain on sale). More information about tickets
and accommodation options can be found HERE.