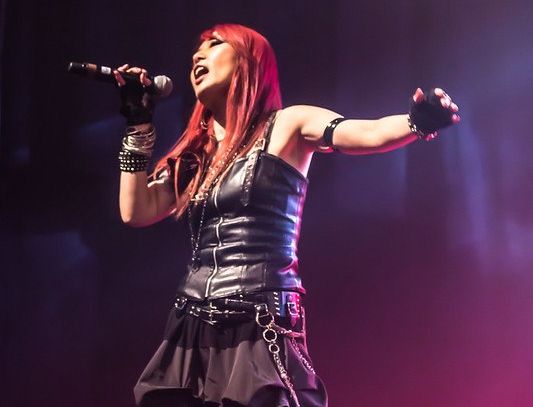 Saeko Kitamae is the first Asian female singer who 1. played at Wacken Open Air! (’05) and 2. toured with the Metal Queen, Doro! (’04). Having these two marks in the metal history, she is entitled to be called an Asian metal queen, or a Japanese metal queen at the least.

In 2003 in Germany, an international power metal project, SAEKO, was set up, led by Saeko Kitamae with the help of well-known German musicians, such as Michael Ehre (Metalium, Gamma Ray, Primal Fear etc.), Lars Ratz (Metalium), Sven Lüdke (Mob Rules) etc. The first album, “Above Heaven Below Heaven” was released in ’04 and the second album, “LIFE”, in ’06. During these years, she was welcomed by both international audience and media. In 2004, while on tour with Doro and Blaze, all the copies of her 1st album on hand sold out when she was still in the middle of the tour. In 2005, at Wacken Open Air, the capacity audience all raising their fists insisted strongly on encores. Soon after that, all copies of the album in stock sold out again.

In 2006, however, SAEKO suspended its activities to the disappointment of many. The cultural / legal / language barriers were for a Japanese woman too high to get over.

The time has come, however. On 11th January 2020, she launched a crowdfunding campaign for the 3rd album recording. She has the line-up of amazing musicians, perfect for her metal vision. They have started arranging songs. Now all she need is YOUR help!