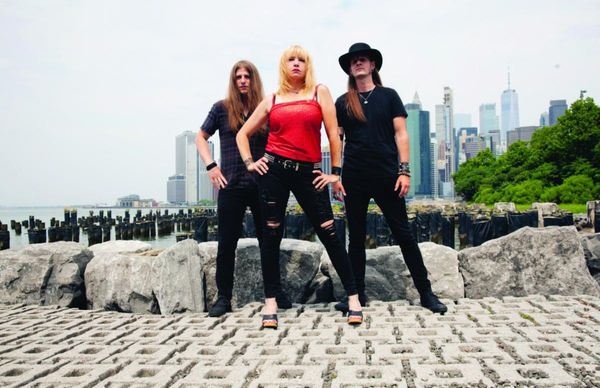 Brooklyn power trio SANHEDRIN will play a trio of Midwest shows this weekend en-route and following their appearance at Legions Of Metal! The band will grace the stage of Westside Bowl in Youngstown, Ohio this Friday.

Saturday the band will head to Reggies in Chicago, Illinois for the aforementioned Legions Of Metal fest alongside Nasty Savage, The Lord Weird Slough Feg, Riot, and so many others.

SANHEDRIN will close the weekend with a performance at Sanctuary in Detroit, Michigan. In June, the band will play the Metal Immortal Festival pre-party in Pittsburgh, Pennsylvania with more shows to be announced in the weeks to come.

See all confirmed dates below.

SANHEDRIN will be touring in support of Lights On, released earlier this year via Metal Blade Records. SANHEDRIN do metal the old-school way, channeling the greats that preceded them to create something that is instantly familiar yet with a new, modern energy to it.

Tracked, mixed and co-produced by Colin Marston at his studio Menegroth, The Thousand Caves in Queens, New York, Lights On refers to the many events of the last few years that have exposed larger societal issues long hidden or ignored.

Notes the band: “In a time where the world around you feels like it’s aflame, when our heavy metal heroes are beginning to disappear to failing health or changing social norms, we, stand here as a shining light through the dark. We are prepared to fly the flag of heavy metal in these trying and uncertain times and have only begun to show the world what we are capable of.”

To preview and purchase Lights On, visit THIS LOCATION.