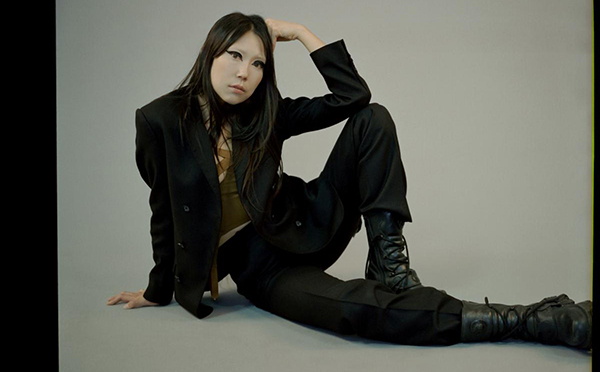 Today, SASAMI, the musical project of Los Angeles composer, songwriter and producer, Sasami Ashworth, releases a heavy rendition of Daniel Johnston deep-cut “Sorry Entertainer.” The single acts as a peek into the sonic world to come, on her highly anticipated, yet-to-be-announced second album. The video was directed by actor and comedian Patti Harrison and Alan Resnick.

“I made my last album when I was in a very emotionally vulnerable and tender place, but after a couple years of touring those same subtle, more sensitive songs, the live show became louder and more volatile,” says SASAMI. “A bit before the pandemic took hold I was really getting back into metal and numetal, so a couple months into quarantine I made an acoustic version of the System of a Down song “Toxicity.” My sadness ripened into anger throughout 2020, and deeper into it I started experimenting with a heavier palette and decided to perform the inverse exercise of metallicizing an acoustic song. ‘Sorry Entertainer’ is my take on mixing the desperation of being a hopeless and powerless artist and the extremely powerful sounds of a metal band. Like giving a toddler a flamethrower… or a fullstack.”

Additionally, SASAMI has announced a US fall tour supporting Japanese Breakfast. All dates below.

SASAMI spent her early years studying classical French horn, and after graduating from the Eastman School of Music in 2012, she scored and made orchestral arrangements for films, commercials and studio albums. She also spent many years as a music teacher before touring full-time—first with Cherry Glazerr, then as SASAMI, after releasing her self-titled, widely critically acclaimed debut solo album in 2019 on Domino. Whether she has strings, horns, or a rock band in her employ, SASAMI is a modern composer who tackles an emotional spectrum as broad as her arrangement choices and creates a dynamic show with her musically dramatic offerings. Hushed vocals, guitar wails, violent yelps and tender harmonies can all be expected at a SASAMI show.