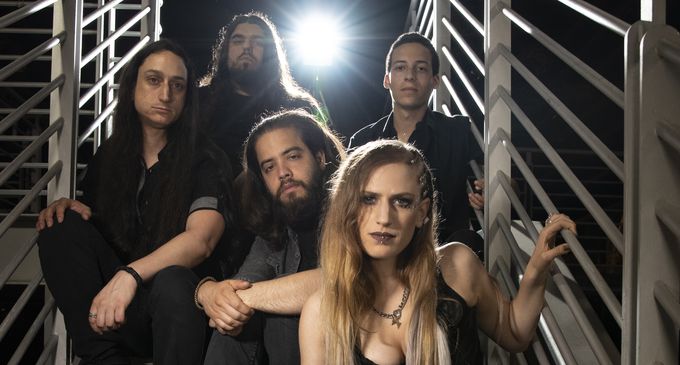 In advance of their upcoming live appearances in the United Kingdom, the Israeli symphonic/progressive metal band SCARDUST has unveiled a live composite video for ‘Dials’, a track from their recently reissued debut album ‘Sands of Time’.

The clip – which was compiled by the group’s vocalist, Noa Gruman – can be seen here: https://www.youtube.com/watch?v=i3vayC_Bi00

“Ever since we first played Dials live in 2015, our fans have been asking us to make a video for it. Being the longest and most complex piece of Sands of Time, we wracked our brains, time and time again about how to do that. The truth is – the answer was there all along. As the Dials forever turn for all of us, Scardust is also moving forward, and shaping every day, as we experience our ups and downs, our changing paths and scorching scars. The re-release of this piece gave us the perfect opportunity to present a compilation of Scardust’s life up to this point, with scenes taken from the beginning of the road right up to our most recent concerts.”

Next week, SCARDUST will travel from the Middle East to the UK to play three shows, including a performance at the annual Ramblin’ Man Fair, where the band will appear on the Prog In The Park Stage alongside Riverside, Pain of Salvation and Anathema. From there, the group will head to Slovenia’s Metaldays, where they will perform on the festival’s Newforces Stage.

Originally self-released in Israel in 2017, “Sands Of Time” – mastered by Jens Bogren (Opeth, Devin Townsend, BTBAM) and featuring cover art by Drake Mefestta (Cradle of Filth, Michael Romeo, Devilment) – is now available worldwide on gatefold double LP, digital and compact disc. The new CD reissue features a bonus acoustic piano demo of the previously unreleased song “Mist,” while the limited-edition debut vinyl pressing includes the group’s 2015 debut EP “Shadow” in its entirety on Side D – the first time that release has been offered on vinyl as well.

The critical response to “Sands of Time” which includes guest appearances by Jake E (Cyhra, ex-Amaranthe) and Kobi Farhi (Orphaned Land), has been overwhelmingly positive. In its 10/10 review, The Metal Observer called the album “a progressive metal epic that expands on the legacy of the biggest names in the genre,” while Prog Magazine called the record “extraordinary,” praising Gruman’s “vocal gymnastics as she flips between elegant soprano and guttural demon in a split-second.”

SCARDUST have previously played alongside the likes of Symphony X, Therion and Epica and recently made their live debut in China, where they performed at the country’s Midi Festival.

To coincide with the band’s UK dates and their Metal Days show in Slovenia PHD will be offering the band’s ‘Sands Of Time’ CD and LP at special discounted prices of £10 and £20 from July 18th to 25th
CD = https://www.plastichead.com/item.aspx?catno=M0402
LP = https://www.plastichead.com/item.aspx?catno=M0401