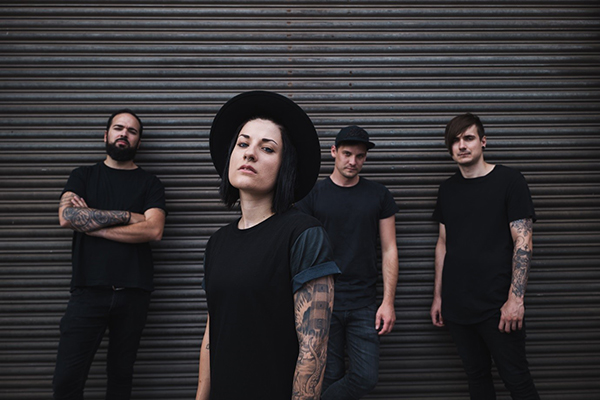 Young, enraged and standing steadfastly against hate – SETYØURSAILS have made a name for themselves by not mincing words in the least while churning out the most brutally catchy anthems around.

Now, the band is about to take things to the next level, unleashing their purely addictive second album and Napalm Records debut, Nightfall, on January 21, 2022.

Nightfall promises a mixture of searing metal, gut-punching hardcore and heartfelt melodic elements, leaving room for surprises at every turn. On a total of 13 tracks, SETYØURSAILS makes one thing clear above all: they are more than ready to conquer the scene!

This sonic dagger comes along with a crushing official music video, showcasing that SETYØURSAILS never compromises. Prepare for buzzing guitars, intense breakdowns and powerful, vicious shouts that provide the listener with a colossal taste of what’s to come on Nightfall.

SETYØURSAILS about “Ghosts“:
“We are very proud to finally be able to show what we have worked so hard on. There is so much heart, sweat and honesty in this album that it’s almost scary to let it go. ‘Ghosts’ brings all the elements of the album together in one song, making it the perfect first single release.”

SETYØURSAILS performs uncompromising yet melodic post hardcore-influenced metal, convincing both live and on record. The unit has already performed at well-known festivals (Reload Festival, Traffic Jam Open Air) and converted fans alongside genre greats like Bullet for My Valentine, Hatebreed, Jinjer and Walls of Jericho with its unbeatable live energy.

The first album, Enough (2018), has attracted the attention of noteworthy outlets like FUZE and MoreCore, and now, SETYØURSAILS is proudly heading for round two.

Nightfall stands as an impressive return for SETYØURSAILS, who once again prove its musical diversity. A mixture of catchy choruses and intense breakdowns are evident on brutally melodic “Why”, the changing spectrum of “Deadline”, and “Into the Storm”, which starts with a crisp deathcore intro.

Among others, “Nightfall” (featuring Andy Doerner of metalcore veterans Caliban) shows the full straightforward range of Jules Mitch’s vocals, which oscillate between concise and clear, intense screams and expressive growling. “Mirror” begins atmospherically before bubbling up to an impressive journey through personal conflicts without losing its undeniably catchy quality.

With tracks like “Secrets” and “Forgive Me” the band also presents its softer side. SETYØURSAILS is also full of surprises – together with Mike Perez from No Bragging Rights, the band covered “Shallow” (from the film A Star Is Born) by Lady Gaga and Bradley Cooper, and give the ballad its personal touch, once again proving its musical diversity.

Nightfall was produced, recorded, mixed & mastered by Annisokay vocalist/guitarist Christoph Wieczorek and songwriter/producer Julian Breucker at Sawdust Recordings. Both have already worked with greats like Beyond The Black, Eisbrecher and Emil Bulls – just to name a few.

SETYØURSAILS about the new album:

“This album is the most honestly written work we could get out of ourselves. It reflects the struggle of dealing with oneself, fear and life itself. It’s dark, it’s loud and it hurts. But most importantly- it’s true.”

Claim your copy of Nightfall NOW!