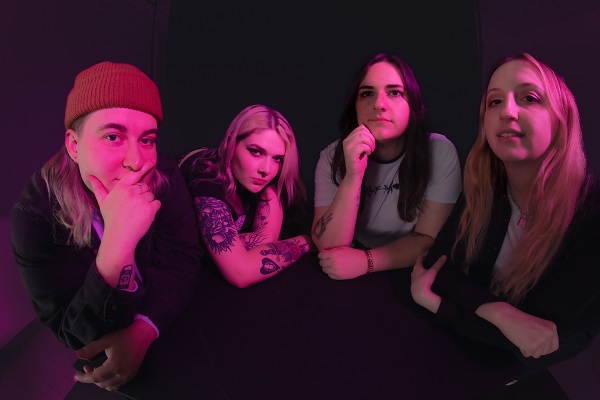 Rude Records/Equal Vision Records and Boston-based indie-pop quartet shallow pools are excited to present “Say What You Want”, the band’s first song for the label and an anthem that was birthed out of a show and Pride event that sparked protest.

Co-written with LGBTQ+ trailblazer and PVRIS frontwoman Lynn Gunn, “Say What You Want” is a powerful assertion of identity underpinned by the serious message at its heart.

“I feel like we always want to make some kind of statement”,says vocalist Glynnis Brennan, “and after that show we wanted to write something that basically said ‘Fuck the haters’. As members of the LGBT community, this song just feels really important to us”.

The music video itself is about breaking free from societal expectations. The band’s matching outfits represent society’s reluctance to accept individuality — we’re all meant to blend in and act the same. Their actions are proper and polite at first, but there’s also an underlying level of discomfort here.

As the video progresses, each member starts to embody one of the seven deadly sins, ultimately freeing them from all expectations. They all come together at the end of the video and gain the confidence to be themselves. Watch the music video for “Say What You Want” on YouTube HERE.

Inspiration for a song can come from anywhere, and often when you expect it least. That’s what happened to shallow pools — the Boston-based band comprised of drummer Ali Ajemian, vocalist Glynnis Brennan, guitarist Jess Gromada and bassist Haley Senft — with “Say What You Want”, the four-piece’s first song for Rude Records/Equal Vision Records.

Some five years of playing together as shallow pools, the band — who started out playing together as friends in school around a decade ago — think that they’ve now finally hit their sound. Slick and sophisticated, it’s a far cry from those early days, but the band acknowledge how important those days were in terms of finally getting to where they are now.

“Back then, we were just playing what we were listening to, but as we got older everything kind of changed”, the band says. “We spent a lot of time experimenting with genres and writing songs that we didn’t necessarily like playing live. Now, we play songs that we like writing, playing and listening to”.

Much of that has to do with the close relationship between the four of them. Not only are they close friends who share a house but they all also share similar political views. Such is their interest in activism, in fact, that they feel shallow pools is about much more than just the music they make.

It’s a vehicle for sharing their views and message, and a way for them to offer people what they felt they needed and wanted from bands when they were younger. As such, both the idea of representation, and turning something negative into something positive — as “Say What You Want” so effectively does — have very much become the band’s purpose and reason for existing, not least then when LGBTQ+ people still face prejudice on a daily level.

“The most important thing to me is making people feel safe and comfortable”, says Brennan. “I know that’s something that I looked for when I was younger. Just being able to have a song like this, that’s just like ‘Be yourself, who cares what anybody says?’, is something that a lot of people need to hear, especially these days with all the political nonsense happening in America”.

LISTEN/WATCH “SAY WHAT YOU WANT” HERE!