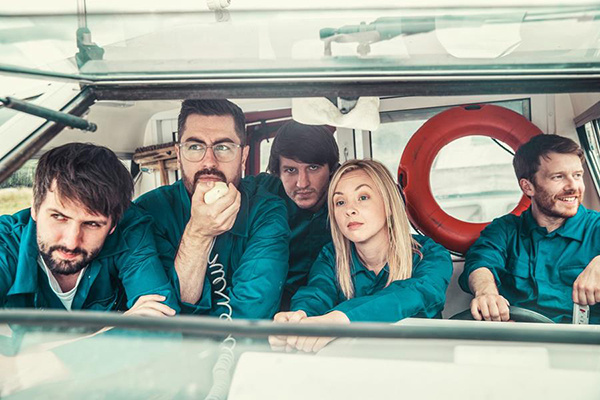 Watch the video for “Wear My Medals”

Dublin art-rock quintet Silverbacks is today sharing a brand-new single, “Wear My Medals“, along with the news that the band has signed to Full Time Hobby.

“Wear My Medals” is the first new material from the band since the release of last year’s acclaimed – and Choice Music Prize-nominated – debut album Fad. Hear “Wear My Medals” here.

“From the very start, we’ve always wanted to be a ‘career band’. We don’t see the point in not constantly making music – if you’re lucky enough to be able to make music you like and enjoy it, why put restrictions on it?”, says Kilian O’Kelly, one of the three guitarists in Silverbacks.

After the release and acclaim provided to its debut record “Fad” in 2020, it would have been understandable for the band to take a step back, and take stock of its achievements thus far. Not so – writing sessions began early in 2020 for what they hope to be the follow-up.

Guitarist and vocalist Daniel O’Kelly began sending files back and forth from his new base in Paris while the others – Kilian, bassist and vocalist Emma Hanlon, guitarist Peadar Kearney and drummer Gary Wickham – remained in Ireland.

They spent their downtime from live commitments refining and shaping their ideas, taking to the studio when they could with producer Daniel Fox (Girl Band) to try and push themselves and their music forward.

Latest single “Wear My Medals” – and first for new label Full Time Hobby – gives an indication of where they’re headed.

Fizzing with energy and excitement, the band career through the track with their joy ripping out of the speakers, topped by a stunning vocal turn by Emma Hanlon.

“We always set out while demoing to write ‘Emma Songs’ – songs that we think will specifically work for Emma’s vocals” says Daniel O’Kelly.

“We were quite a ways through the latest batch before we realised we hadn’t gotten any Emma Songs down so she and Kilian got to work.”

Riffs on endurance athletes and their dietary peccadilloes, wrestling heels and control, it’s at turns brash and soothing, screed and lullaby.

The characteristic guitar interplay remains from previous works but there’s a newfound tautness to the lines, focussed and locked with a thunderous performance from the rhythm section.

Lauren Gregory, director of the song’s video, shared some insight into what inspired the artistic direction she took:

“The band gave me complete creative license, so I really got to let my imagination run wild. For the swimming scenes, I took inspiration from the movie “A Philadelphia Story”, a scene in which Katherine Hepburn is swimming and climbing out of a pool.

When I was working on the boxing scenes, I watched a lot of footage of Muhammed Ali warming up before fights, jumping and punching the air, and tried to emulate his movements. Out of everything, sculpting the hands playing bar chords on the guitar was the most fun.”

How do the band think the people who reacted so well to their previous record will feel about this move forward?

Happy in its own world of writing, recording, refining, release and repeat, Silverbacks lives for its work, allowing the creative impulses to dictate where the songs go next. It’s going to be an interesting journey.

Listen to “Wear My Medals” on DSPs here and watch the video below.

The band play Manchester Psych Festival this weekend and head back out on the road in October: