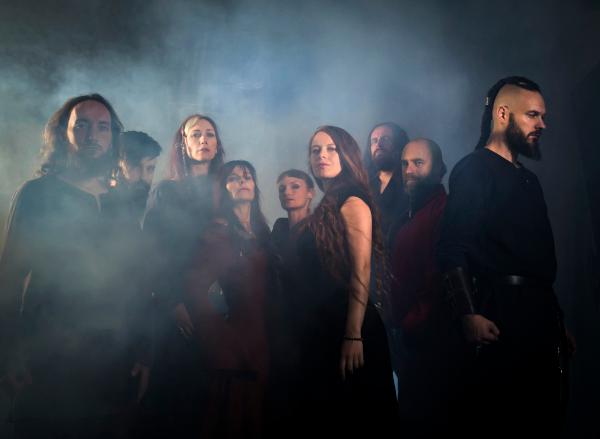 The band will kick off the tour stateside on April 12 in New York City at Le Poisson Rouge and will continue across the east coast and Midwest before making their way up to Canada where they’ll complete their routing April 19 at Theatre Fairmount in Montreal.

Tickets are available now at https://skald.lnk.to/live.

SKÁLD were last seen in 2022 on a headlining tour across Europe and have been showcased at several of Europe’s major festivals including Hellfest (FR), Wacken (DE), Rock Oz’Arenes (CH) and Motorcultor Festival (FR).

SKÁLD have also shared a the third track from HULDUFÓLK. It’s a distinctive cover of Rammstein’s hit single “Du Hast” with SKÁLD’s Viking-style Nordic folk spin which includes the use of traditional Scandinavian instrumentation dating back to the 14th century and shamanic percussion.

Listen to “Du Hast” in the visualizer video below or streaming HERE.

The collective previously covered The White Stripes’ “Seven Nation Army” on their 2019 debut album Vikings Chant. It has since garnered over 35 million streams, making it their third most streamed track to date.

HULDUFÓLK was composed and produced by the collective’s mastermind Christophe Voisin-Boisvinet and features over a dozen musicians and songwriters. Sung entirely in Old Norse, the ancient language of Scandinavia, HULDUFÓLK transports listeners into a land inhabited by weird and wonderful creatures, and mysteries with its poetic and epic soundscape while sharing the myths and legends of Scandinavian poets and shamans with tales of otherworldly beings coexisting with humankind.

The album’s debut single “Troll Kalla Mik” (“They Call Me Troll”) shares the lore of the “Huldufolk” (“hidden people”) and the dangers one faces when stepping into their realm.

Their second single “Då Månen Sken” (“When The Moon Shone”) was released in December and tells the tale of the mythical femme-fatale Skogsrå, a forest nymph who lures men and binds their soul to the forest. Throughout its 12 tracks, further myths and legends are brought back to life.