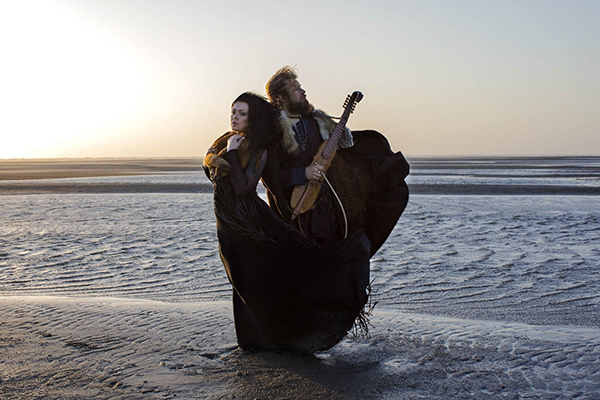 Inspired by Nordic legends, band with over 100 million streams return with new album 2019’s astonishing musical hit SKÁLD are returning with a new album, Vikings Memories, due for release on October 9. The band, who are inspired by Scandinavian culture and Norse mythology, have enjoyed huge success worldwide with their debut recording Vikings Chant, which surpassed 100 million streams, 45 million YouTube views and 80,000 album sales.

They have also performed live at major European festivals, thrilling fans at Hellfest in France, Wacken in Germany and Rock Oz’Arènes in Switzerland with their unique style and sound.

Through their music, SKÁLD take inspiration from the poetry of the ancient skalds who sang and told stories of the Vikings and their gods. Their music is characterized by singing in Old Norse and the use of ancient instruments including shamanic drums, talharpa, jouhikko and more. For their new album, SKÁLD are moving away from Earth and Fire to focus on the element of Water, responding to the call of the seas with original compositions which offer a rich and evocative soundscape. The music once again tells a story: a saga of the people of the North and their relationship with nature and the ocean. The songs recall forgotten tales of lost lands that now lie beneath frozen waters (like the Doggerland, which once bound Great Britain to Scandinavia) and offer stories of voyages in the company of adventurers and seafarers who have navigated the most perilous seas. Those ancient songs – reimagined and recomposed for a modern audience – remind us of nature’s power and fragility, and encourage us to listen to what the past has to tell us, so that we might build a future with harmony.

The sound of SKÁLD is created through two contrasting voices: Justine Galmiche’s warm yet powerful tone, combined with the guttural, vibrant resonance of Pierrick Valence. They work closely with producer-composer Christophe Voisin-Boisvinet, who uses a broad palette of instruments to immerse the listener in an extraordinary musical world. There is an array of percussion alongside stringed instruments, like the nyckelharpa or skáldharpa – which was specially conceived for the group. Underpinning the sounds are arrangements which draw on world music and Celtic influences, with rousing orchestrations. So, if you’re not afraid to return through time in the company of oarsmen searching for lands of ice and the three magic lights of the Bifröst, and if you’re ready to face a destiny engraved in stone amid the howling winds that keep company with the approaching winter, you should board the legendary vessels of the ancient Norsemen with SKÁLD, and listen to the message that they have for us.

In the two years since its inception, SKÁLD has taken an unexpected path through the international musical landscape by breathing new life into the Viking spirit.
The group was founded in 2018 when producer- composer Christophe Voisin-Boisvinet brought together some first-rate talents – among them singer Justine Galmiche and singer/multi-instrumentalist Pierrick Valence – to form an immersive musical project; SKÁLD embraces the ancestral spirit of the ancient skalds who chanted of the legends surrounding the peoples of the North and their gods.

Their first album, Vikings Chant, directly influenced by the Nordic sagas, conjured up a universe of forgotten worlds with a blend of tribal sounds and powerful voices. It also proved to be a musical hit, with more than 100 million streams worldwide, 45 million YouTube views and over 80,000 albums sold. SKÁLD have given numerous live performances in France (including a key appearance at the Hellfest), as well as Germany (Wacken), Portugal, Russia and Switzerland.

2020 sees the release of their second album, Vikings Memories, via Decca Records France, followed by a European tour in 2021. Tracklisting & artwork :