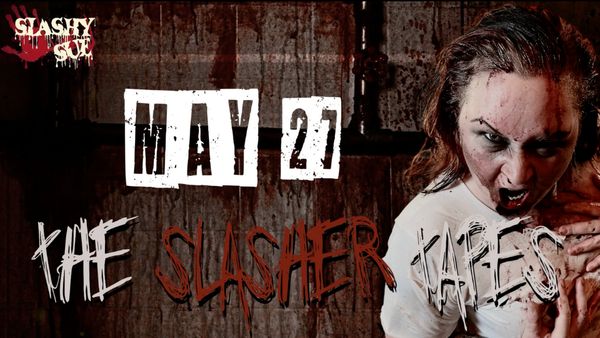 The album consists of ten varied songs, all with the base in Sue’s stories.

The story around Slashy Sue is built around the life of serial killer and cannibal Susan Henderson, who roamed the streets in the 90´s.

ABOUT
“Industrial, horror themed metal. She is brutal, cold and dark.“

By the Swedish founders of the critically acclaimed Zephyra, the project SLASHY SUE was formed in 2019.
Industrial horror metal based on the fictional serial killer ‘Slashy Sue’ and the story below.

SLASHY SUE is built around the story of Susan Henderson, a serial killer and cannibal who roamed the streets in the 90’s, killing and eating over 35 men. For 20 years she’s been locked up at a psychiatric institution, and agreed to talk only to professor Ernest Bardreau. The songs are her confessions.

THE STORY
Susan Henderson was moved to a foster home at the age of 3, when her parents were found dead in their home. Little Susan was found sitting next to her dead mother and father, playing with her teddy bear. The police suspected that Susan’s parents had been dead for three weeks when they were found, and pieces of their arms and legs were missing.

Susan adapted to her new home rarely fast, and did not seem to care about the fact that she’d lost her parents.

One day Margaret, Susan’s foster mother, found the girl in the family’s barn. Susan’s dress was covered in blood, and the little girl was holding a dead cat in her arms. Susan had been eating from the dead cats body and couldn’t stop laughing.

“Sue” has been institutionalized for over 20 years, after being diagnosed with multiple personality disorder with severe narcissistic tendencies, and sentenced to spend the rest of her life locked up at the psychiatric institution.

In 2005, she agreed on being interviewed by psychology professor Ernest Bardreau.
The songs are her confessions.