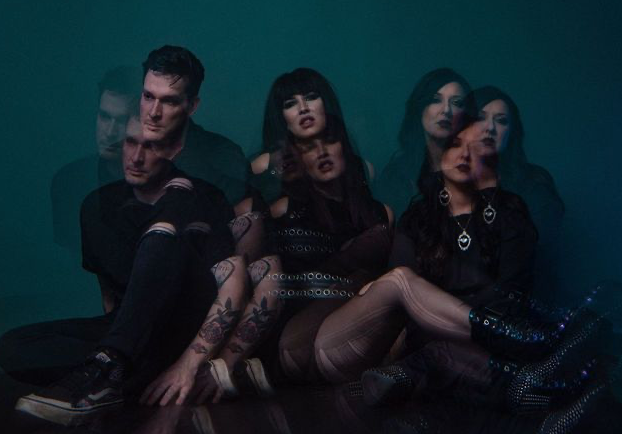 Philadelphia rockers Soraia take on the KISS classic “Strutter,” the latest single off the band’s upcoming 10-song LP ‘Bloom’, which is slated for release on October 28, via Stevie Van Zandt’s Wicked Cool Records.

Soraia front woman ZouZou Mansour says, “We have had so many suggestions of songs to remake that I’m always surprised about what we inevitably decide to cover – ‘Strutter’ was the biggest surprise mainly because our bassist Travis (Smith) suggested it, and I had no idea that it was even a song he knew or appreciated. But because he did—we covered it. That simple. Just a fun song to do, and any size audience loves singing along to it.” “Strutter” is the follow-up to the lead single “I Seek Fire” which is currently making waves at rock radio. The video for that track was directed by Sam Shapson (Yeah Yeah Yeahs , Demi Lovato, Oliver Tree, Thrice, Corey Taylor, All Time Low, MKG, Poppy) and is streaming here:

Coming off the massive chart success of the 2021 single “Tight Lipped” and 2020 breakthrough album ‘Dig Your Roots, the deeply personal new album finds the band covering new ground both sonically and lyrically.

“Ultimately, our new album is about rising above all of the slights, injuries, and traumas we’ve all experienced – personally and together – and positioning ourselves into a new place we’ve chosen. A place with renewed courage and vitality. We realize we are all deserving of a life driven by our choices and power,” affirms ZouZou Mansour, lead singer and lyricist for Soraia.

Catch Soraia opening for Joan Jett in September and on their fall tours with Josie Cotton and Hayley and the Crushers. See dates below.

6 Hammer and the Anvil

‘Bloom’ builds on the themes established throughout the band’s career. Their first studio album ‘Dead Reckoning’ (2017) featured songs defining where they stood from the viewpoint of where they’d been. 2020’s ‘Dig Your Roots’ was all about accepting who and what they are, and ‘Bloom’ – the third in the series – is about letting go of all these things and finding that new place: musically, as a group, and as individuals. If 2020 taught us anything—it is how to unapologetically stand up proudly for who and what we are.

The LP begins with the hard rock we’ve all come to expect of the band. As David Fricke, formerly of Rolling Stone Magazine claims, “Searing guitars, burning soul, and true CBGB grit: Soraia are the rock you need in your face now” and they have not changed their step here. The album opens ferociously with an emblazoned “YEAH!” in “Jokers, Thieves, and Liars” and doesn’t let up through Side B.

Though the album focuses on hard-driving melodies, the band passionately explores new territory in some tender moments. ‘Jackson’s Song’ – a surprisingly simple song yet beautifully tragic love story between two bikers – is a vulnerable spot on the album. It’s one partner’s confession of her changing emotions and personhood that ends in a solid moment fated by twisted loyalty. Another anthemic song is the soul-defining and very personal ‘Mephistopheles’ which closes the record. A claim on current culture mirrored in an intimately personal experience, Mephistopheles himself is a charmer – both wildly alluring and utterly deadly. The song’s highlight is the dark angelic backgrounds in the final chorus—a statement that visually brings to mind Dante’s Inferno. ”Mephistopheles’ is about a real experience and holds its place at the end of our record for a reason….” affirms ZouZou Mansour, lead singer and lyricist for Soraia.

With every release, Soraia continues to gain experience, momentum, and strength. They have garnered the attention of many soulful rock legends in the music business, including Jon Bon Jovi, Steven Van Zandt, and Joan Jett. The core band features ZouZou Mansour (lead vocals), Travis Smith (bass), and Brianna Sig (drums). Together, they have unmatched chemistry and passion for the music they play.

Soraia does what they do best on ‘Bloom’: shine and reflect through personal stories a universal identity we all share. Their songs promise life after loss, and survival that is both fragile and tough.
‘Bloom’ is the promise of redemption, newfound passion, and dark warriorhood. The black lotus rising from the mud that blooms into the most beautiful flower: it blossoms from its sin, scars, and final survival—a spirit brimming with strength. What has kept these warriors together through thick and thin is that bond. That darkness. That hope: To grow together.

We will keep telling our stories.