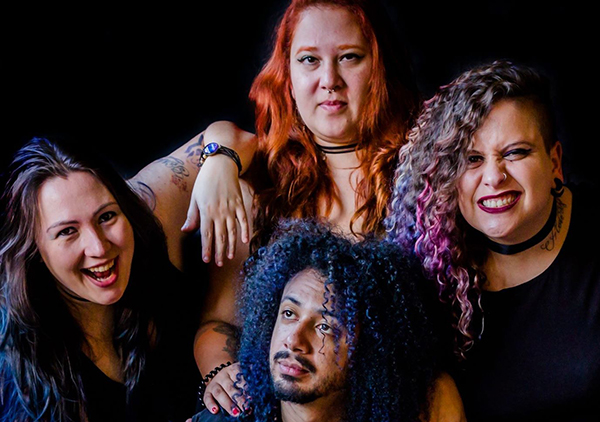 Special Drink is a stoner and alternative rock quartet from Brazil formed by: Dani Veras on guitar and vocals, Gessica Pantera on guitar and vocals, Nadia on bass and vocals and Derick on drums.
The band has just released their debut EP via Abraxas Records on all streaming platforms. “Booze” is the title of the first work, an EP that has 7 songs, including an instrumental one.

The EP was recorded at Studio 3 in São Paulo between 2019 and 2020. For the production, recording, editing and mixing, the quartet has the work of Ivan Kverinha. The mastering was in charge of Rafael Augusto Lopes from Casanegra Studio, and cover art by Rafael Estavaringo. “Booze” in English refers to a cheap drink, better known as the infamous “goró”. The choice of this concept was due to the fact that it was the beginning of everything, something more raw and to the point.

The cadenced sound, heavy guitars, female vocals alternating between clean and drive, striking bass and broken drums are the trademark of the band, which has clear influences such as Black Sabbath and Alice in Chains, passing through L7, Corrosion of Conformity, Drain STH, Mastodon and Red Fang.

Special Drink is that drink that expands your senses. It makes you see through yourself. It is the expansion of thought without barriers. The melodies and lyrics present a piece of each member, expressing their emotions, internal conflicts, indignation with society, system and religion.