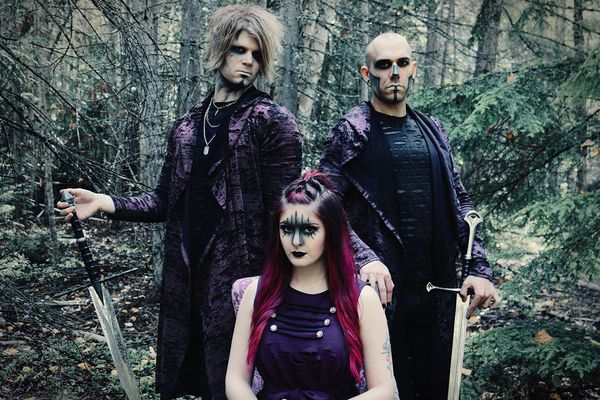 Vancouver-based American/Canadian symphonic hard rock band Stands on Sapphires stormed onto the rock scene in an apocalyptic way at the end of last year with their entirely self-made and self-produced album Inviting Warfare.

Now, the band is making waves again with the release of their new album Inviting Warfare…there are no words, an instrumental version of their pinnacle album.

The band is made distinctive in part by its composition of a husband-and-wife duo with their life-long friend. Lead vocalist Bethany Rose, guitarist Trevor Isaac, and bassist Wade Britz, jammed together for years before deciding to go all-in on Stands on Sapphires in late 2019.

The instrumental album Inviting Warfare…there are no words, removes all lyrics and vocals from Bethany Rose to emphasize the pure instrumental talent that is the backbone of the album.

Emotions are still a heavy undercurrent in the album, even without lyrics, as the band states, “We’d say this a ‘Diva Free’ album…but that just wouldn’t be true.”

Inviting Warfare…there are no words will be available on Spotify, Apple Music, YouTube, and to purchase on their website.

Listen to the original Inviting Warfare on Spotify: https://open.spotify.com

Watch the official music video for “For the Fight” on YouTube:

Inviting Warfare…there are no words features the instrumental versions of all the original tracks from the album without the lyrics, plus three bonus tracks with just the orchestral arrangements for “For the Fight,” “Orchid,” and “Warfare.”

Without words, the focus lands solely on the swells of music, otherworldly chords, and symphonic melodies that explore all sub-genres of hard rock and is a representation of how Stands on Sapphires is 100% self-made. In deciding to release an instrumental album, the band says, “It would be a shame NOT to show off the amazing musicianship that went into this album.”

Stands on Sapphires takes influence from bands across the rock spectrum, including Skillet, Van Halen, Meatloaf, Shinedown, and Alter Bridge.

The band transcends the rock genre to create a world of their own, fully embodied in the musicianship on Inviting Warfare…there are no words. The band continues to work on their music daily. Expect new singles and covers soon.

About Stands on Sapphires:

Stands on Sapphires is a hard rock band that toes the line between rock and metal. It is comprised of lead vocalist Bethany Rose, guitarist Trevor Isaac, and bassist Wade Britz.

For more information on Stands on Sapphires, please visit