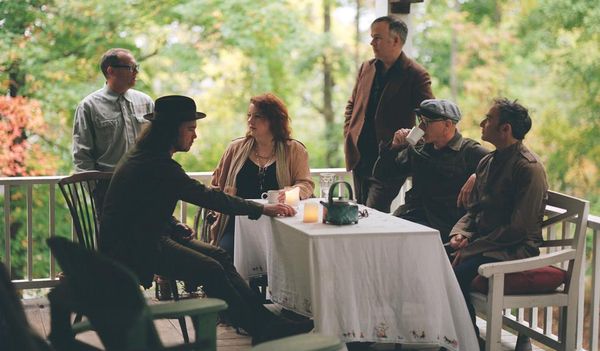 Recently filmed at Montreal’s Zoomer studio and directed by Darren Curtis, the live video offers another live preview of Stars’ first world tour in years; its lyrics find Amy Millan and Torquil Campbell swapping verses and once again taking the role of two characters that try to stay together but instead keep destroying one another.

Campbell says the track is the epilogue to their stories: “I don’t know what comes after,” he says. “I just make records about other people and in the end, they turn out to be about me.”

The band will continue virtual festivities on May 31st, beginning with a full album listening party via Tim Burgess’ Twitter Listening Party series at 1pm Eastern, followed by a Reddit AMA at Indieheads at 2pm Eastern.

Musically, Stars’ ninth album and follow-up to 2017’s acclaimed There Is No Love In Fluorescent Light feels like walking into their familiar teenage bedroom.

Campbell says it cuts to the band’s founding principles: it is brimming with gothic, dazzling ‘80s and ‘90s Britpop arrangements, but rendered with intimacy and warmth rather than with cold, digital remove.

A wealth of horn and string arrangements unfold across the record in true Stars fashion, dreamy and macabre. From Capelton Hill is ultimately about a group of people who have spent more than 20 years together, and who have now started to face the awful, necessary calculus each human eventually must do: when will all of this end?

From Capelton Hill is available for pre-order here.