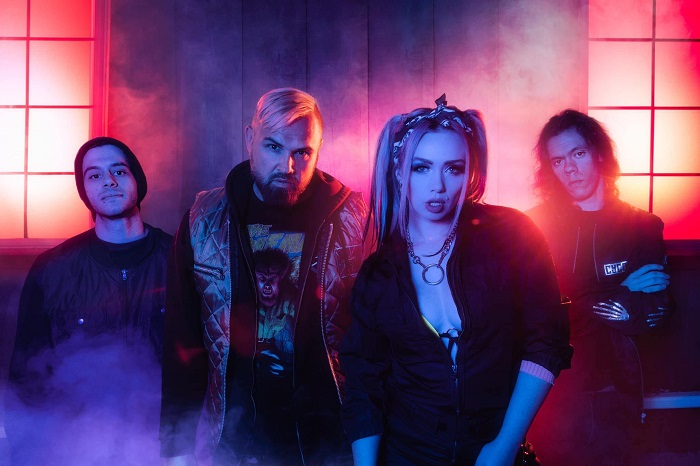 After setting the music world ablaze in May with the release of their mind-bending latest full-length album, Initiation, fans instantly clamored for more SUMO CYCO. Those prayers are now answered with the drop of the official Initiation Digital Deluxe Edition! Featuring peppy new single “Sun Eater”, plus additional limited edition tracks “New Jive”, “We Are The Nation” and “Awakened”, the Initiation Digital Deluxe Edition is available today via all digital retailers.

Frontwoman Skye “Sever” Sweetnam says about the Initiation Digital Deluxe Edition:
“We are ecstatic to get more music out there on the Deluxe Edition of Initiation. We wrote so many songs for Initiation and had some really solid tracks that just didn’t make it on the original track listing. We just can’t keep them to ourselves.”

Skye adds about “Sun Eater”:
“When I wrote ‘Sun Eater’ I was contemplating life’s big existential questions. No matter what problems we’re faced with, we’re all just here for a moment spinning warp speed through space. When one starts thinking of the big picture, it can also make our everyday problems seem more insignificant. I sing about my inner demons very often in my music, when comparing those demons to a massive Sun Eating monster of the universe, it really is no match. So, the song is really about seizing the day, because it really is crazy that we even exist.

For the video, I wanted to try some 2D animation inspired by Monty Python and some of my favorite movie and TV opening title sequences. I wanted to inject lots of our signature colour but simple compositions of each frame keeping it all very stark and contrasted. In the video, I have created an alter dimensional clinic where my demons are waiting for a cure. I also introduce the mad Nurse who only prescribes one type of pill for everything. A gold pill that harnesses the sun.”

SUMO CYCO’s Initiation invites a mass of new followers into their warped, dystopian-like world of “Cyco City”! As with its predecessors Lost In Cyco City (2014), Opus Mar (2017) and countless singles, Initiation is based in the imaginative conceptual location of “Cyco City”. But unlike most concept albums, the lyrical content is inspired by the band’s real-time environment – featuring timely, personal themes of love, sacrifice, anxiety, empowerment and more that all listeners can relate to. By the end of Initiation, listeners will wonder just what exactly SUMO CYCO can’t do, proving them as a band on the rise, and that unconventionality always stands out from the pack.