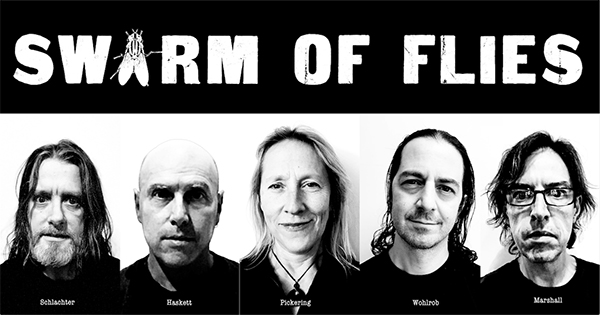 SWARM OF FLIES — a new collaborative musical project created by Ken Wohlrob of New York City’s Eternal Black and End of Hope — will be releasing its next single, “Wendigo,” on January 14th, 2021. The song features Amy Pickering, frontwoman for punk legends Fire Party, on vocals and Chris Haskett, of the Rollins Band, Pigface and Foetus, on guitar. “Wendigo” will be available on the project’s Bandcamp page ( swarmofflies.bandcamp.com) and also available on streaming services including Spotify and Apple Music. In addition, the single will be featured January 20th on Bandcamp Daily, the music site’s guide to the artists, fans and labels on Bandcamp.

As with the two previous Swarm of Flies tracks, “Mine All Along” and “The Jaunt,” “Wendigo” is a collaboration between all the musicians involved. Wohlrob sent initial track layers to Haskett, Pickering, and frequent collaborator Davis Schlachter (End of Hope, Reign of Zaius), who then responded back with their own contributions, leading the song into new directions.

According to Wohlrob, “Once I started Swarm of Flies, I knew I wanted Chris to play on something. He’s one of the most gifted guitarists on the planet, with a truly unique style.” Wohlrob added, “I knew he would take the weird bent of the initial layers I sent and run with it.” Haskett’s guitar tracks offset the song’s initial riff, creating a twisted interplay between the two guitar parts in the left and right channels.

Pickering’s powerful vocal contributions came about in the true spirit of the project — a happy accident. Initially, Pickering sent four different takes to Wohlrob, thinking the guitarist would pick the best bits from each and merge them into a single vocal track. According to Wohlrob, “Initially, I just dropped in all of Amy’s tracks to make sure everything lined up okay. But suddenly I was hit by four different versions of Amy, sort of having an argument with one another. It sounded so unique and powerful — I had never heard any one layer vocals in quite that way — so I wound up using them all together.”

“Wendigo” was mixed and mastered by Kol Marshall (“Mine All Along”) of Suburban Elvis Studios, who along with his production partner Joe Kelly, has also produced albums for Eternal Black and End of Hope. In addition, Marshall has a long list of production credits including King Diamond, Mercyful Fate, Ministry, Usurper, and Absu.

About SWARM OF FLIES:

SWARM OF FLIES is a collaborative musical group created by Ken Wohlrob of New York City’s Eternal Black and End of Hope. The project’s goal is to continue to release new music during the coronavirus pandemic while the members’ other bands are on hiatus. More than just a stopgap, SWARM OF FLIES main focus is creating original music, rather than cover songs, and getting it out into the world as quickly as possible. Instead of crafting an album, Swarm of Flies will release new tracks as they are created. Each song will feature a different lineup of musicians from the heavy music/punk rock community. As of this writing, members of Eternal Black, Rollins Band, Shadow Witch, Fire Party, End of Hope, Witch Taint, Pigface, St. Bastard, Foetus, Reign of Zaius, Thunderbird Divine, and Clamfight have joined the project.    About ETERNAL BLACK:
Formed in late 2014, Brooklyn’s Eternal Black is made up of Ken Wohlrob (End of Hope) on guitar and vocals, Joe Wood (Borgo Pass, Bloody Sabbath) on drums, and Hal Miller on bass. The group came together out of a desire to create dark songs driven by fuzz-drenched riffs and old-school heavy grooves. Their first album, Bleed the Days, debuted at #4 on the Doom Charts and was #25 on The Obelisk’s “Top 30 of 2017.” They followed it with Slow Burn Suicide in 2019, which debuted at #8 on the Doom Charts and was #21 on The Obelisk’s “Top 50 Albums of 2019.” In addition, they recorded a live album at the prestigious WFMU studios in Jersey City, NJ, titled Dead at WFMU. Sludgelord said of Eternal Black’s sound, “This is doom as it should be in America today; angry, abrasive and seething with an undertow of disillusionment.”

About END OF HOPE:
Formed in 2018, End of Hope brought together four musicians from well-known New York City-based bands who wanted to combine the intensity of Black Flag with the speed rock ‘n’ roll of Motörhead. The band consists of Davey Gunner of New York Hardcore legends Kraut on vocals, Dave Richman of the one-man sludge-and-doom project St. Bastard and black metal band Witch Taint on drums, Davis Schlachter of Brooklyn’s ape-rock purveyors Reign of Zaius on bass, and Ken Wohlrob of Brooklyn doom heavyweights Eternal Black on guitar. Shortly after they formed, End of Hope released a two-song EP, titled D E M O, in March of 2018, and then followed it with their debut album Cease & Destroy in November 2019. Part of the reborn New York Hardcore scene, End of Hope has twice played the Back to the NYHC Roots series organized by Drew Stone at A7, the birthplace of New York Hardcore.