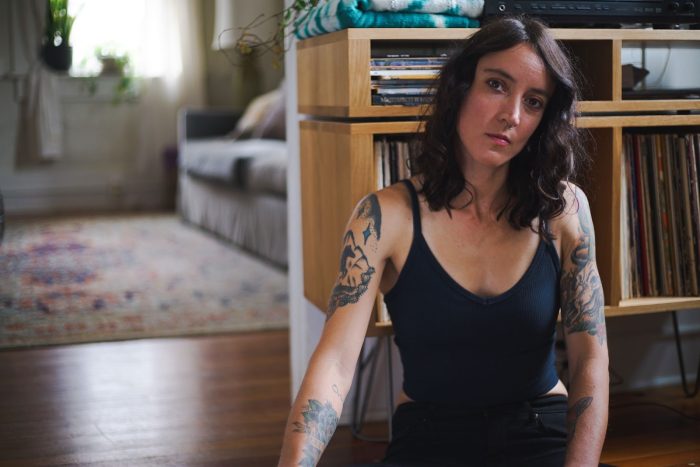 Today the singer, songwriter, and bassist Sylvia Rose Novak has released a new single, titled “Man I Used To Be”, from her upcoming 5th studio album A Miss / A Masterpiece. The single, which is a driving and passionate power-pop / rock tune, represents the artistic transformation and liberation of Sylvia Rose Novak, as she completes her pivot away from the Americana / alt country sound of her early records into an exciting new alt-rock sound inspired by the emo and pop punk bands she loved as a teenager.

LISTEN TO “MAN I USED TO BE”

“Man I Used To Be” is the first single from A Miss / A Masterpiece, which will be released in full on May 20th, 2022.  After years of feeling pigeonholed and misunderstood by the genre category she was initially placed into and the expectations that came along with that, this is the first album that Sylvia has made so far far that she feels truly encapsulates the full person and artist she always knew herself to be, now finally actualized in the music. A Miss / A Masterpiece is her declaration of independence, trading in cowboy boots for her favorite Black Sabbath tank top, black jeans, and a scuffed pair of well-loved motorcycle boots – the look that she should have introduced herself with in the first place. As she put it herself, “I’m trying to really find my footing in the industry with this album. Not so much as an “I play rock now” thing but as an “ I made a rock record because I do what I want” thing. I may make an indie album next. I may make a metal album. The future is wide open.”

A MISS / A MASTERPIECE TRACKLISTING:

Sylvia Rose Novak was born and raised in Opelika, AL – the sister-city of Auburn, AL, growing up the “weird” kid who loved Nirvana in a town mostly full of country music lovers. This dynamic is one that would repeat itself later in her life, as she found herself stuck in the lane of being an alt-country / Americana artist when her true passions lie elsewhere.

A Miss / A Masterpiece follows Novak’s aptly-named 2020 album, BAD LUCK, which was met with acclaim from publications such as American Songwriter and Billboard as it carefully bridged the gap between her former life as an Americana artist and her foray into pure rock and roll.

The drums on A Miss / A Masterpiece hit hard and loud, the bass and guitars are down-tuned and heavy. And Novak’s voice, though clearly still hers, hasn’t so much matured as it has tapped into something raw and real that’s been buried deep within her all of these years. The album is also deeply personal; touching on her fears of nuclear fallout in “Fallout”, hitting hard notes about reproductive rights in “Stress Fracture”, offering a glimpse into bipolar depression with “Rage”, and penning a memoir about the time she was addicted to uppers via “The Window” – a track on which she also played violin for the first time since she put down the instrument in 2019 to focus solely on bass.

The bass was Novak’s first instrumental love. Though she’s multi-instrumental – having learned everything from Trombone to pedal steel over the last two decades, something about the bass has called to her since she was twelve years old and first heard the introductory bars to “Sweet Child O’ Mine.” Duff McKagan’s counter-melody reached out to her as if it was an old friend, a kindred rebel soul. From that moment, her relationship with the instrument has only grown and is now the bedrock for the sonic rebirth that’s so evident throughout A Miss/ A Masterpiece.

After BAD LUCK connected the dots between her Americana past and her alt-rock future, Novak is expecting fans of her previous work to leave their preconceptions at the door with A Miss / A Masterpiece, and realize that the Sylvia Rose Novak they thought they knew is a Sylvia Rose Novak who never was.

by: staffFebruary 18, 2022
A Miss A Masterpieceman I used to benew albumnew singlePlanetary Groupsylvia rose novak