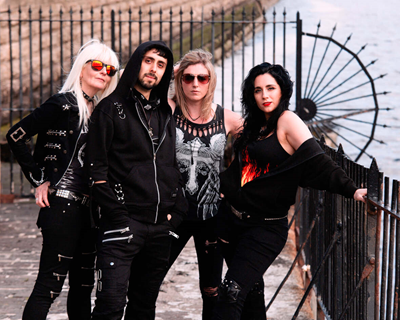 Syteria are excited to announce that have signed a contract with the amazing Curtain Call Records!

Syteria are a band formed by Jackie ‘Jax’ Chambers Lead Guitarist of the Legendary Girlschool and are based in Yorkshire, England. They first came on to the scene with an introductory video for Christmas late in 2015 called Santa’s Harley.

Then they kickstarted a full on campaign in 2016 self releasing their EP ‘Wake UP’ featuring Mike Kenworthy formerly of Raven playing drums, Keira’s (Bass) dad, who helped out whilst they secured a permanent drummer.
They added the final member of the band with Pablo Calvo, Julia’s (Vocals) little brother, shortly afterwards playing gigs they were noticed and added to play the Main Stages at major festivals all over the UK.

In 2017 after a successful Pledge campaign, they recorded their Debut album Rant-O-Bot and received rave reviews from magazines and online here in the UK and abroad. In 2018 Syteria were nominated for an Independent Music Award for the Album reaching the Final 5. Syteria continued to play and promote Rant-O-Bot playing major festivals, Thailand, Corfu, Europe, headline and support shows throughout 2018 and are currently about to release their follow up album called Reflection is released on 21st February 2020 followed by a full UK Tour. Then a new chapter of Syteria started in late 2019 with Keira leaving the band due to other commitments and was replaced with Steph Dawson, formerly of the band Scream Of Sirens.