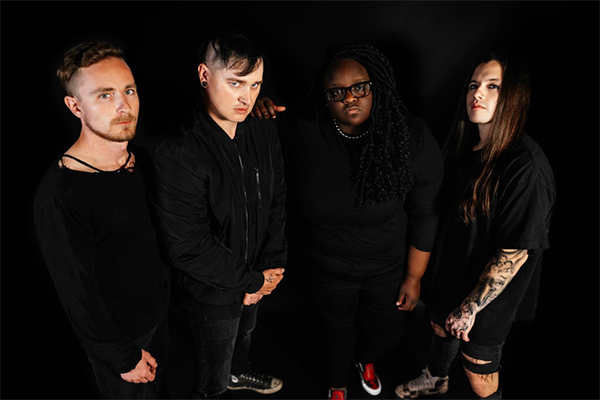 Breakout metal stars TETRARCH have continued to deliver on their promise of taking over the metal scene in 2021 with the release of their two successful new singles, “I’m Not Right” and “You Never Listen”, and today – in anticipation of their new album Unstable (out April 30 via Napalm Records) – they’re dropping a third!

Their most aggressive single yet, “Negative Noise”, sees TETRARCH enter full-on blisteringly heavy metal territory with an addictive modern twist. The sonic call to rise above the mediocre static that surrounds us stands tall as a vigorous, unrelenting banger – walloping with gritty riffage, forceful growls and an unrelenting double bass assault. The track impacts today alongside a hard-as-nails music video.

Frontman and guitarist Josh Fore says:“‘Negative Noise’ is one of the heaviest songs on the new record. It mixes big riffs with thick bass, extreme drums and some of the most intense screams I’ve ever done. One of the highlights of the song is Diamond’s guitar solo that she absolutely killed and I know will turn so many people’s heads.
Lyrically, the song is about constantly being surrounded by negativity and people trying to pull us in a million directions. More than ever, there is so much static around us, and we wanted to write a song about dealing with it and blocking out all of the noise.”

Negative Noise” follows the prowess of “I’m Not Right” – an anthem that cracked the Mediabase Active Rock Top 30 and has garnered over four million combined cross-platform streams to date – as well as “You Never Listen”, which is quickly rising up the Active Rock charts with SiriusXM, HardDrive, Full Metal Jackie and many other of the country’s leading active rock outlets supporting.

TETRARCH enters the month with another milestone to note, as cover stars of issue 57 of New Noise Magazine! The issue is available to order now HERE and includes a special exclusive Flexi disc of the original arrangement version of “I’m Not Right”!

Produced by the band and Dave Otero (Cattle Decapitation, Allegaeon, Khemmis), Unstable follows the band’s breakout debut Freak (2017). The new album shines not only as a natural step forward for TETRARCH, but a giant leap ahead – an even more focused effort combining bright flourishes, grooving low-end and soaring choruses. Unstable wastes no time igniting with the unforgettable, punching first single “I’m Not Right”. Boosted by frontman Josh Fore’s raw emotion and dynamic vocal style, the track pays homage to the genre’s greats while lifted by the eerie leads of trailblazing lead guitarist Diamond Rowe. Radio-ready, lyrically-relevant tracks like anti-bullying anthem for the ages “Sick Of You” and empowering “You Never Listen” showcase TETRARCH’s hefty progressions and unforgettable choruses. Unstable’s heaviest offerings prove the band’s dynamic assault of varying heavy styles, most notedly on assertive breakneck burner “Negative Noise” – a track that will turn the heads of metal’s greatest riffers with Rowe’s mighty axe attack – and on the melodically chilling “Take A Look Inside”, highlighting the powerful rhythm section of bassist Ryan Lerner and drummer Ruben Limas. The album explores a brooding, introspective side of the band on the standout, melodic “Addicted” and closer track “Trust Me”, which trickles-in supernatural atmosphere. Delivering heavy hit after hit, Unstable is 10 tracks of pure potency and undeniable talent.

Lead guitarist Diamond Rowe says about the album:“The album has an overall theme of self-reflection and really looking at the relationships or parts of yourself/your life that you don’t like and getting out of those situations. It’s an angsty record. Musically, we were not timid in showing that we refuse to be boxed in as artists, and I think we really came out swinging with showing the world the type of band that we want to be. Freak did great for us and showed us that the music we were making was something that people wanted to hear, and that gave us the confidence to write and record this beast of an album.”

Unstable will be available in North America the following formats: