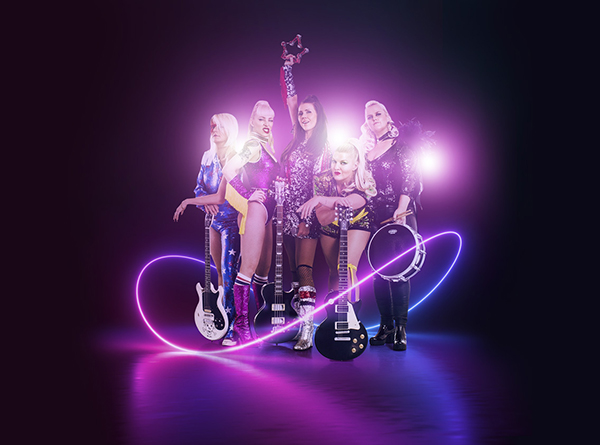 Stream The New Single and Music Video “Be The One”

A catchy rock’n roll tune from the five-piece Norwegian all-female band Cocktail Slippers about the magic of spilling beer and falling in love! It can be described as a Blondie, Joan Jett and Hellacopters crossover with a touch of 90-Scandi-rock, seasoned with loads of attitude!

Stream The “Be The One” Music Video Here

“The Cocktail Slippers sound a lot like The Go-Go’s, but with gats instead of L.A. cheer, and a mule kick in their high heels,” – Rolling Stone’s David Fricke

The Cocktail Slippers, the raucous five-piece all-woman Rock band from Oslo, Norway, will release ‘Shout It Out Loud,’ its fifth full-length album (and the act’s first in seven years) on September 17 via Wicked Cool Records.

The album, produced by the band, and co-produced by Steven Van Zandt and Mike Hartung, is a ten-song trip through the world of this fiery female troop who wear both their passions and their musical influences on their sleeves.

The bold album title declares that the best way to express one’s self is at the top of your lungs, and trumpets the band’s mission to prove just how intensely they mean what they say.

The upcoming album’s new single “Be The One” follows on the heels of previously released singles “She Devil (Shout It Out Loud”), “Night Train”, “Like A Song Stuck In My Head” and “City On Fire.”

The video is a one-take Steadicam shot of the five-piece performing “Be The One” in their rehearsal space. The twist is that Hope (lead vocals) sings the song slowed down by 75 percent of its normal speed while the rest of the group interacts in regular time. Hope describes it best: “It just looks crazy!”

“Be The One” (Single) Stream: orcd.co/betheone

The band says of the new single, “That feeling when you meet someone and you instantly think, “This person is no good at all.” But then you get to know them and it turns out your first gut feeling was way off. “It started out wrong but it turned out right.” The song is actually about falling in love – head over heels – when you weren’t expecting that to happen at all.”

“Some songs are just about having fun, some are darker and some are more emotional,” says singer Hope of the album’s nine original tunes written by the band, two with co-writers. Along with guitarists Rocket Queen and Vega, bassist Sugar and drummer Miss A-OK, the quintet tracked the new songs at Oslo’s Propeller Studio, producing the album with Stevie Van Zandt and Mike Hartung.

“The Cocktail Slippers sound a lot like The Go-Go’s, but with gats instead of L.A. cheer, and a mule kick in their high heels,” wrote Rolling Stone’s David Fricke about the band, whose last album, 2014’s People Talk, featured the hit “Shame On Me.”

Despite the long time between albums, the band has kept busy with live shows, writing new songs all the while. The four satellite radio hits they’ve released as singles in the past few years – “Excuse Me” (co-written with popular Norwegian artist Ida Maria), “Night Train,” “Like A Song Stuck In My Head” and “City On Fire” – all appear on an album for the first time here. “She Devil (Shout It Out Loud),” which lends part of its title to the album itself, got the group’s 2021 started with a bang when the song was featured as Coolest Song In The World on Little Steven’s Underground Garage. The track features a satirically sexist, tongue-in-cheek spoken word cameo from The Mighty Manfred, frontman of longtime Wicked Cool labelmates The Woggles.

While staying true to the fast-paced Garage Rock sound that has cemented their reputation, the band is confident this new album marks a step forward in their songwriting. “We write all the time, and we can write about anything!” explains Rocket Queen. “But we’ve learned that writing is often about re-writing.”

The album’s tenth and final track is its only cover, an update of the late-’60s Joe South classic “Hush,” originally made famous by Deep Purple. “We’ve been doing it live for awhile and this was supposed to be a B-side,” says Hope. “Stevie heard it and said, ‘This is too good for a B-side, it needs to be on the album.'”

After catching the ear of Van Zandt in the 2000s – interestingly, years before the actor, artist and impresario would go on to star in the Netflix original TV series Lilyhammer, about an American gangster in Norway – the group came to New York at his invitation and delivered a scorching set at the Underground Garage Festival with Iggy & The Stooges, The Strokes and Bo Diddley.

The band has enjoyed other brushes with greatness along the way, like a London Calling set on a bill with Paul McCartney and Bruce Springsteen, as well as time spent with idols like Jimmy Page, Joan Jett and Blondie.

When live performances return on a mass scale, the Slippers will support the release with touring in the U.S., U.K., Spain and Scandinavia. Norway shows are slated to begin this August.

The Cocktail Slippers’ playful spirit is always on display in their music videos, including the recently released clip for “She Devil (Shout It Out Loud)” which captures them strutting around the streets of Oslo, and not quietly.

When all is said and done, the five Slippers are a tight-knit gang of friends. “When we’re not hanging out as a band, we’re hanging out as friends, with and without our families,” Sugar shares. “Hope loves both cross-country and downhill skiing and is a mean captain on her own boat.”

“Rocket finds great joy in renovating houses,” Vega adds. Miss A-OK continues; “Sugar is a great photographer. Vega makes and edits movies. A few of us are more than a little geeky about cooking. Miss A-OK even grows her own vegetables on her balcony.”

The group is thankful for Van Zandt’s continued commitment to their music. “Mister Silvio Dante a.k.a. Stevie Van Zandt gave us an offer we couldn’t refuse,” Rocket Queen says jokingly of how they joined the Wicked Cool fold years ago.

Shout It Out Loud! is the latest Wicked Cool release distributed by The Orchard, another gem from the label which also boasts Jesse Malin, The Dollyrots, WYLDLIFE, Steve Conte, The Woggles, Soraia, Marc Ribler, Kris Rodgers & The Dirty Gems, Jessie Wagner, Ryan Hamilton & The Harlequin Ghosts and The Empty Hearts on its expanding roster.

The Cocktail Slippers are: