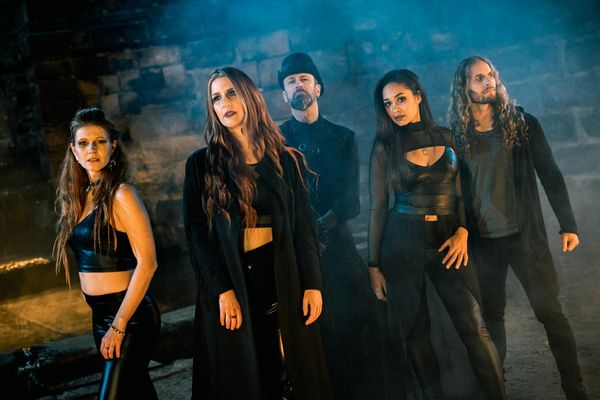 THE DARK SIDE OF THE MOON: new single

THE DARK SIDE OF THE MOON Reveals Second Single Ever + Official Music Video!

Watch the Video for The Lord Of The Rings Soundtrack Cover “May It Be”, Featuring Charlotte Wessels, HERE!

Consisting of Members of Feuerschwanz, Amaranthe and Ad Infinitum

THE DARK SIDE OF THE MOON, consisting of members of Feuerschwanz, Amaranthe and Ad Infinitum, have released the second single and music video since their formation – their version of Enya’s The Lord Of The Rings – The Two Towers theme, “May It Be”. The original song is the soundtrack to one of the darkest storylines of the whole saga, spreading hope when there seems to be none left.

THE DARK SIDE OF THE MOON is accompanied by Charlotte Wessels on the song and video. The haunting duet passages of Melissa Bonny and the exceptional Dutch singer let the song shine in a completely new way.

Energetic drumming and a great guitar solo add new highlights to the song that, already with the second song of their career, showcases the versatility and talent of this newly founded band.

THE DARK SIDE OF THE MOON on “May It Be”:

“Today we are proud to present our second song! On our musical quest through the mystic worlds of fantasy movies and games, we take you on a journey through Middle Earth, to the Undying Lands!!

In honor of Tolkien’s unmatched epic tale, the 20 year anniversary of the movies and the upcoming series, we present you our version of “May It Be” – a version that you never would have expected – that’s a promise!

And on top of that, we are beyond proud to have a very special guest in this song, the amazing Charlotte Wessels, who is riding with us to take this song to the next level!”

Watch the official music video for “May It Be” HERE:

With “May It Be” and the first single, “Jenny Of Oldstones”, THE DARK SIDE OF THE MOON aim to transform musical themes from cinematography, TV shows and video games into powerful and epic modern metal tracks and add completely new elements via the trademark guitar playing of Hans Platz and versatile voice of Melissa Bonny, as well as the use of the harp.

In doing so, THE DARK SIDE OF THE MOON will not limit themselves to cover versions, but will also write original songs.

THE DARK SIDE OF THE MOON started with a bet between Melissa Bonny and Hans Platz. Whoever lost owed the other a “dare”.

Hans won and challenged Melissa to record a metal version of “Jenny Of Oldstones” with him, and so the band began to turn their favorite cinematic themes into powerful metal songs!