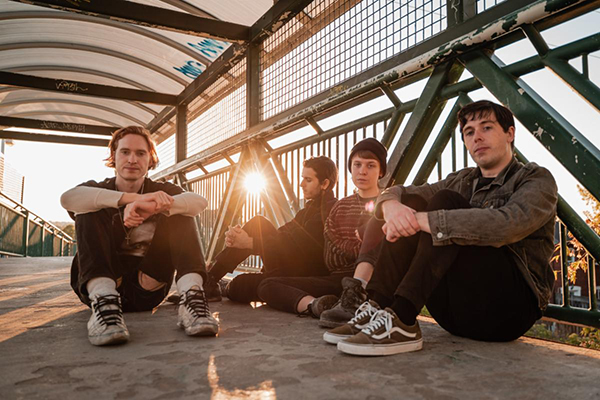 Their music has a moodiness reminiscent of alt-pop acts like Jack’s Mannequin, Yellowcard, or even Death Cab for Cutie, but with a bit more edge. – FLOODThe new track evokes turn-of-the-century alternative rock and is a twisted love song about how someone can manipulate another person while appearing to care for them. – ConsequencePretty puissant, pretty tenacious, pretty steamy while the intensity goes through the roof. – Turn Up The Volume

Toronto rockers The Effens have released their third EP, Eventually, via Hidden Pony and the group’s own LootBag Records. The culmination of years of feverish experimentation and lineup rotations, lead vocalist and guitarist, Austin Nops (the nucleus of The Effens) connected with Paul Theo (guitar and synth/samples), Hannah Weber (bass and vocals), and Fabian Oblivion (drums) through jam space-meet-cutes and last-minute show fill-ins.

Eventually – including the focus track, “Step Dog,” a grunge-rock take on a Springsteen-esque escape from this dead-end town song – is available to stream via your preferred platform now.

“Step Dog” captures a naive, determined person overcoming the difficulties of life and coming out the other side intact. It’s a loud, free, triumphant close to Eventually.

Eventually was self-recorded and produced in a basement quilt room-turned-recording studio in Nops’ grandfather’s Toronto home, where Nops lived for the past 10 years. Oblivion describes the house as “something out of Beetlejuice.” Tucked in that basement room, says Nops, was “where I felt the most comfortable ever in my life.”

Nops explains that while each track on Eventually carries its own narrative weight – arcs he hopes listeners will divine among themselves – a common thread is loss of innocence, and the pain of trying to protect one’s innocence during change and growth. The purpose of Eventually is to present undoctored clarity: “The songs that come out when you’re not thinking about it are the ones that stick because they’re usually the most sincere,” says Nops.

The tracks on Eventually reveal a keen melodic sensibility and an insatiable urge to distort that sensibility to create something new. Weber says the EP represents a new level of depth and experimentation for a group that is relentless in its desire to present something novel made from that which is routine. This translates to a record that’s essential and accessible, something which at each turn blasts out emotional sonar pings that hit deep and bounce back something newer and weirder and, somehow, better.