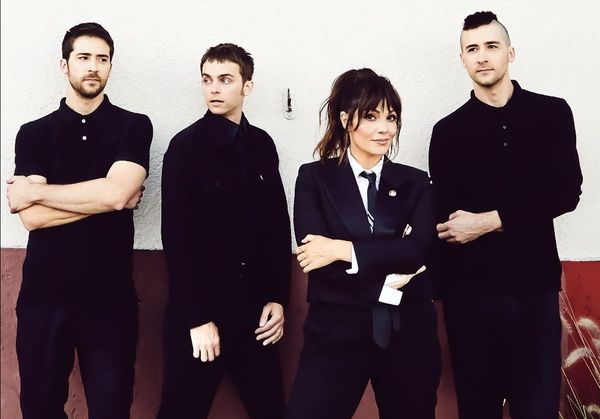 THE INTERRUPTERS
ANNOUNCE ITS NEW ALBUM, IN THE WILD
DUE ON AUGUST 5TH, 2022 VIA HELLCAT/EPITAPH

The Interrupters will release its fourth studio album, In The Wild, on August 5 via Hellcat/Epitaph Records. The 14-track opus is a story of survival and resilience from a band that boldly rejects the easy impulses of simply repeating what’s worked before.

Today, The Interrupters shared the album’s first single, “In the Mirror.”

“I fell into so many self-destructive patterns trying to come to terms with my childhood,” Aimee Interrupter says of the inspiration for the song.

“I spent so long trying to run from the pain. No matter how far I ran, there I was…. I realized I needed to make peace with who I saw in the mirror.”

Kevin Kerslake – director of such iconic films as Nirvana: Live! Tonight! Sold Out! and The Ramones: We’re Outta Here! – helmed the official video for “In The Mirror.”

Finding another gear in the two-tone aesthetic, Kerslake captures the band in an endlessly mesmerizing array of fractured reflections, inspired by classic television (the “Mirror Image” episode of The Twilight Zone), film (Orson Welles’ Lady From Shanghai), videos (Talking Heads’ “Once In A Lifetime” and The Police’s “Every Breath You Take”) and even the work of Old Hollywood glamour photographer George Hurrell.

After supporting Green Day, Weezer, and Fall Out Boy on the Hella Mega Tour, one of the biggest rock n’ roll tours of 2021, The Interrupters will return to the road this summer. The band will be playing UK’s Slam Dunk Festival on June 3 (Leeds) and June 4 (Hatfield), followed by a co-headline tour will Flogging Molly in the US starting June 7.

During the COVID lockdown, Aimee Interrupter, partner and guitarist Kevin Bivona, and his younger twin brothers, Jesse (drums) and Justin (bass), built a home studio in their garage. In this cocoon-like environment, Aimee found the strength to confront the past and together the bandmates created their most personal album yet.

Gliding across a spectrum of breathless punk rock, doo-wop, gospel, dancehall, and the band’s customary nods to the lineage of two-tone, the album is infused with an uplifting spirit. Guests include Tim Armstrong, Rhoda Dakar, Hepcat, and The Skints. The band penned the album’s 14 songs together and Kevin Bivona produced. See below for track listing.

“We are SO EXCITED to announce our 4th full-length album In The Wild,” the band shares. “We put SO MUCH LOVE into this album. Produced by our very own Kevin Bivona, this album takes you on a journey throughout Aimee’s life and every song is a deep delve.

We recorded almost the entire record in our home studio during the lockdown which as we all know was a turbulent time for everyone. The making of the record allowed us to have purpose and to rid our closets of all the skeletons lurking.  Humbled and honored to have features from Tim Armstrong, Rhoda Dakar, Alex & Greg from Hepcat, and The Skints.”

Fans who pre-orderIn The Wild in digital format will instantly receive “In The Mirror.”

The album will also be released on vinyl. In The Wild is the follow-up to 2018’s Fight the Good Fight, which debuted at No. 1 on Billboard’s Heatseekers Albums chart.

The album contained the smash hit “She’s Kerosene,” which entered the top five of Billboard’s Alternative Airplay chart and has amassed over 50 million combined global streams to date, and “Broken World,” which was recently tapped for Epitaph’s Ukraine Benefit Compilation.