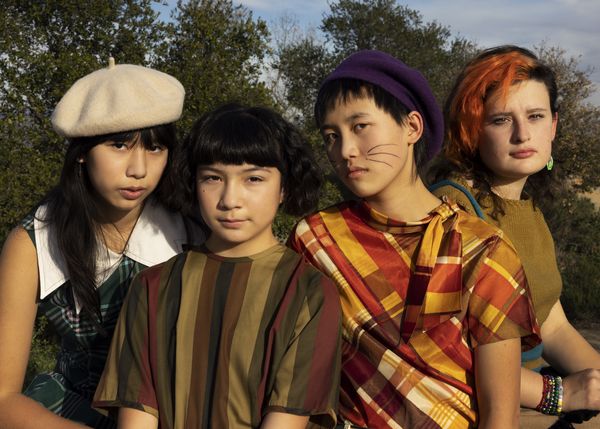 THE LINDA LINDAS: new single out

Los Angeles-based, all-female punk band The Linda Lindas have announced their forthcoming album Growing Up. The highly anticipated release is due out digitally on April 8 and on physical formats June 3 via Epitaph Records.

Fans can pre-order the album here.

Today, the band shares the title track “Growing Up,” written by vocalist/guitarist Lucia. Alongside the track, they release the music video directed by Humberto Leon, co-founder of fashion brand Opening Ceremony and owner of Los Angeles restaurant CHIFA.

WATCH THE VIDEO FOR “GROWING UP” NOW

Humberto Leon on directing “Growing Up”:

“Directing my first video for The Linda Lindas was a dream come true because I love the message and voice the girls have, and I am a true fan. I was really inspired by the girl’s love of cats and wanted to take that to the next level and so the video is a conversation about turning points in their lives all being viewed through the gaze of their cats.

It creates a narrative of whether the cats want to trade places with the girls or vice-a-versa.This video was extra special because I worked with the girls on designing the outfits with Batsheva, styling the looks with Rodarte and Warby Parker. The entire video was a collaboration between me and the girls. By shooting the video on iPhone 13 Pro Max, it created an intimacy with the video that felt like we were listening in on a day in the life of The Linda Lindas.”

Tomorrow night, The Linda Linda’s will perform on The Late Show With James Corden. To celebrate the album announcement and release of their video for “Growing Up,” The Linda Lindas will also host a live streaming mini-concert from Leon’s CHIFA restaurant in east LA on February 3rd.

Fans can tune in at 6PM PST/ 9PM EST via Warby Parker’s Instagram to catch the show. The Linda Lindas will perform songs from their new album as well as previous releases.

The band can also be seen discussing their new single and video with Zane Lowe for New Music Daily on Apple Music 1, now streaming.

The Linda Lindas first played together as members of a pickup new wave cover band of kids assembled by Kristin Kontrol (Dum Dum Girls) for Girlschool LA in 2018 and then formed their own garage punk group soon after.

The Linda Lindas went on to self-release a four-song EP, make their own videos and grow a following beyond Los Angeles. But they never expected or could have even dreamed that their performance of “Racist, Sexist Boy” for the Los Angeles Public Library in May 2021 would put them smack in the middle of the cultural zeitgeist.

“It can be comforting, in times like these, to be slapped cold by undeniable truth. And so it is with The Linda Lindas a band made up of four Asian and Latina teens and tweens [who] have generated a significant wave of attention in the three years since the band was founded,” said the New York Times.

“And this new song, which Eloise said was inspired by a real-life experience, is a needs-no-explanation distillation of righteous anger. It’s severely relatable.”

A month later, The Linda Lindas got to work on their first full-length LP. Having written a mountain of new material individually while sheltering in place and attending class virtually, the band was more than ready to enter the studio where Carlos de la Garza oversaw recording and production. The Grammy-winning producer’s work includes Paramore, Bad Religion, Best Coast, and Bleached.

A product of generations of underground music in L.A. and beyond, The Linda Lindas’ debut channels classic punk, post punk, power pop, new wave, and other surprises into timelessly catchy and cool songs sung by all four members—each with her own style and energy. With an ever-maturing writing prowess and expanded life-experience The Linda Lindas are Growing Up.

The Linda Lindas will play live shows opening for The Beths, Jawbreaker and Best Coast this spring and have just been announced on the line-up for When We Were Young festival taking place in Las Vegas on October 22. Full tour dates are below with more dates being announced soon.

ICYMI – Check out the exclusive Rolling Stone interview with the band about the forthcoming album, and the music video for “Growing Up” shot on iPhone 13 Pro Max here.

MORE ABOUT THE LINDA LINDAS

Formed in 2018, The Linda Lindas first played together when former Dum Dum Girls frontwoman Kristin Kontrol invited them to take the stage to play covers for Girlschool LA (a music and ideas festival focused on connecting and empowering women-identified artists, leaders, and voices).

After forming their own band and playing DIY gigs around Los Angeles, they were asked to open for punk icon Alice Bag and for seminal riot grrrl band Bikini Kill at one of their 2019 reunion shows at the Hollywood Palladium. In time, the band began writing their own material, including a song featured in the 2020 Netflix documentary The Claudia Kishi Club.

The Linda Lindas released their self-titled, self-released debut EP in 2020 showcasing their high-energy and heartfelt brand of punk, naming Jawbreaker, The Go-Go’s, and The Alley Cats among their inspirations. Months later, they appeared in a key scene of Amy Poehler’s Moxie!

In May 2021, The Linda Lindas’ set at the Cypress Park branch of the L.A. Public Library was streamed as an AAPI Heritage Month event (the band members are Asian American, Latinx, or both).

The bands blistering performance of “Racist, Sexist Boy,” amassed over four million views on Instagram, and earned major praise from the likes of Hayley Williams, Questlove, Flea, and members of Rage Against the Machine and Sonic Youth.

FOR MORE INFORMATION ON THE LINDA LINDAS, VISIT: